Western bluebird at the Cowichan Garry Oak Preserve, BC (Photo by Ryan Hetschko) 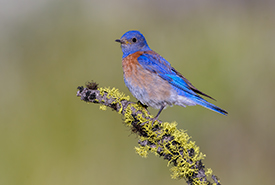 Known as the harbinger of spring, the western bluebird’s subtle song can be heard as the weather warms and wildflowers start blooming in the Pacific Northwest.

Bringing back the bluebirds

Western bluebirds were once common on Vancouver Island and the Gulf Islands, but they had all but disappeared from the region by 1995. Their decline was probably due to a combination of Garry oak habitat loss, the removal of dead standing trees that provide nesting cavities and the competition for nest holes with introduced European starlings and house sparrows.

Inspired by the success of a western bluebird reintroduction project in the nearby San Juan Islands in Washington State, the Nature Conservancy of Canada (NCC) joined forces with the Garry Oak Ecosystems Recovery Team, the Cowichan Valley Naturalists' Society, the Ecostudies Institute and the Province of British Columbia in efforts to reintroduce western bluebirds to the Cowichan Valley.

The Bring Back the Bluebirds Project’s mission is to re-establish a breeding western bluebird population on southeastern Vancouver Island and the southern Gulf Islands by installing nest boxes in suitable habitat and through translocation (i.e., capturing, transporting and releasing birds from one area to another).

From 2012 through 2016, 56 adults and 64 nestlings were translocated from the closest healthy western bluebird population in Washington State. The Nature Conservancy of Canada’s (NCC’s) Cowichan Garry Oak Preserve in Duncan, BC, was the first release site. The preserve continues to be an active site for returning bluebirds, who each year make use of the many nestboxes on site, and can often be spotted flying and perching in the Garry oaks.

Since 2017, the Cowichan Valley Naturalists’ Society (CVNS) has coordinated the project. Through community engagement and volunteers’ hard work, CVNS is ensuring that the network of over 200 nest boxes on nearly 70 private properties continues to provide nesting sites for western bluebirds and other native cavity nesters.

Translocations of this migratory species have been successful, with more adults returning each spring to Vancouver Island and the San Juan Islands and some birds moving between the two locations. However, the small population remains vulnerable. More translocations may be required to secure this species’ long-term presence on Vancouver Island.

The Cowichan Garry Oak Preserve is one of the world’s last and best remnants of Garry oak ecosystems.

With bluebirds returning to the Cowichan Valley each spring, delighting visitors and staff alike, hopes are high that they are back for good.

A member of the thrush family, the western bluebird has a bright blue head and wings, with a rust-orange front that often extends onto its back. Males are larger and brighter than the greyish-brown females.

The western bluebird ranges from BC and Alberta, through the western U.S. into southcentral Mexico. Six sub-species have been identified, two of which occur in Canada. The coastal population occurs in the Salish Sea region of southwestern BC and western Washington. In early fall, these short-distance migrators fly to wintering grounds in Oregon, California and Mexico. They return in late February and March and are among the first migratory birds to re-appear each spring.

These songbirds are cavity nesters, meaning they find nesting sites in the holes of living or dead trees. Because they can’t create their own holes, they depend on naturally occurring cavities, old woodpecker nests or bird houses.

These petite predators perch on low branches, fences and shrubs. Here, they scan the ground for insects to eat, and then drop to the ground when they have spotted one. These birds prefer large, open areas with low grasses so they can easily see ground-dwelling insects.

The coastal population of western bluebird occurs in open woodlands, such as Garry oak savannahs. Today, less than five per cent of this habitat remains in Canada, making this one of Canada’s most endangered ecosystems.