www.natureconservancy.ca > Home > What We Do > Resource Centre > Featured Species > Clams, snails & other molluscs 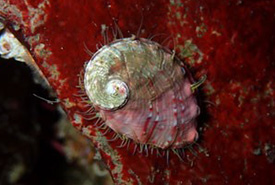 Pinto abalone is a marine mollusc related to snails and whelks. Adults can grow to 16.5 centimetres in length and live for up to 50 years. An herbivore, pinto abalone uses its tongue to scrape up algae and other small plants growing on rocks.

This species has an oval-shaped spiral shell, which can be red to green in colour, with patches of white or blue. The species gets its name from this brilliant mottled pattern. The inside of its shell is a pearly bluish white that shines faintly pink or green. Its soft body, called the foot, is tan in colour. The sides of its foot are fringed with small, dark yellow or brown tentacles. Pinot abalone breaths through the three to six small holes along its shell. 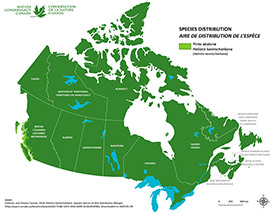 Pinto abalone is found along the Pacific coast, from Sitka Sound, Alaska, to Turtle Bay, Baja, California. In Canada, it is found in patches along the coastline of BC. This species lives close to the shore, at depths of 10 to 18 metres. Adults are usually found gathering closer to the shore than juveniles.

Pinto abalone is a culturally significant and traditional food for the Haida and many First Nations on the Pacific coast. Indigenous food gatherers are careful not to harvest more than is needed, allowing the pinto abalone population to recover and remain stable. For thousands of years, this species was sustainably harvested by Indigenous Peoples and eaten throughout the year. Due to pinto abalone’s recent decline in numbers, this traditionally significant staple has become much harder to find in areas where populations were once plentiful.

In 1999, the Committee on the Status of Endangered Wildlife in Canada designated pinto abalone as threatened. This status was increased to endangered in 2009. Pinto abalone matures slowly and populations are spread far apart from one another, making it difficult for it to reproduce and rebuild its numbers.

Scuba diving and commercial fisheries resulted in pinto abalone being harvested faster than the population could recover. Harvesting of pinto abalone has been illegal in BC since 1990, and all abalone fisheries have been closed. The most serious threat to pinto abalone is poaching, which continues to reduce its numbers.

Protecting areas along British Columbia’s coast will ensure pinto abalone populations have access to suitable habitat. The Nature Conservancy of Canada’s (NCC's) work on the West Coast is helping to protect marine habitats that help this species survive.