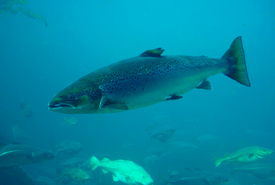 Adult salmon are excellent jumpers. In fact, that is how they got their name. In Latin, salmon means “the leaper,” as they have the ability to jump up to 3.5 metres out of the water.

In Canada, the Atlantic salmon populations in the Bay of Fundy, Anticosti Island, Cape Breton and southern Nova Scotia have been designated endangered. 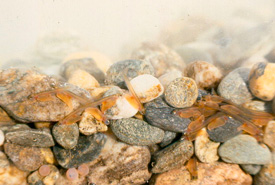 Atlantic salmon fry contained in their "lunch box" in a redd (Photo by U.S. Fish and Wildlife Service)

Atlantic salmon have soft fin rays and a short dorsal fin along the top of their body. They also have a distinct fatty fin near their tail, called an adipose fin.

Typically, Atlantic salmon weigh less than 4.5 kilograms and can reach lengths of up to 70 centimetres.

Juvenile Atlantic salmon have a splotched colour on their sides, but after three to five years their scales turn silver as they approach adulthood. When they return to their native river to reproduce, the fish’s body takes on a greenish or reddish hue with a few large spots.

Atlantic salmon have small teeth along their jaw. Males also develop a hook on their lower jaw, called a kype. 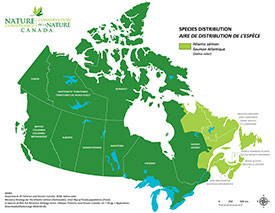 Atlantic salmon were once found in every country whose river flowed into the North Atlantic ocean and Baltic Sea.

Atlantic salmon currently reside on Canada’s East Coast in, as the species’ name suggests, the Atlantic Ocean. You will find the fish off the coast of Quebec and the Maritimes, but it does exist outside salty waters. This species of salmon is anadromous, which means individuals live in salt water but were born in fresh water. They will live in salt water for one to three years, and use their olfactory memory to return to spawn in the watershed where they were born.

Atlantic salmon return to fresh water to reproduce. While living in fresh water, the species needs clean and cool, flowing water free of pollution. While spawning, Atlantic salmon (and most species of salmon) requires a watershed with rapids and pools and a gravelly bottom to create a redd. A redd is a salmon’s spawning nest, created when a female digs a small area of the substrate with her tail. The fry remain in the redd until their yolk sac, called a “lunch box,” depletes.

The species’ diet varies depending on what stage of life it is in. Juvenile salmon still living in their native river will eat zooplankton, larvae and invertebrates. As they migrate to salt water, their diet will change. In the ocean, salmon will consume smaller fish such as herring, krill and shrimp. 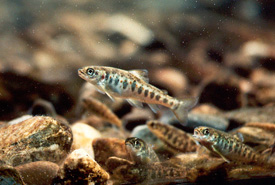 Despite living on opposite coasts, there is a strong resemblance between these two species, including their appearance, diet and spawning habits. However, each species has a genus. Atlantic salmon belong to the genus Salmo and Pacific salmon to Oncorhynchus. Members of Oncorhynchus include species such as Chinook, chum, coho and pink salmon. One key difference is that while Pacific salmon die after spawning, Atlantic salmon return to the sea.

The circle of life 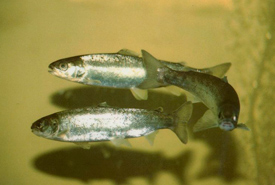 Born in freshwater rivers, newly hatched salmon are referred to as fry or alevins, becoming parr once they leave the redd. After two years, the parr become smolts and change into a silvery colour as they prepare to migrate to salt water. This stage of their life begins in the fall, but actual migration occurs in late May or in June. After one winter at sea, the smolts mature into adult salmon.

In December 2015, NCC began Phase 2 of our conservation efforts on the Salmonier River in Newfoundland and Labrador. This involves conserving an additional two properties along the river, which total 176 hectares (436 acres). So far, NCC has preserved 64 hectares (158 acres) for permanent conservation. The Salmonier River is a provincially designated salmon river, hosting a healthy population of Atlantic salmon.