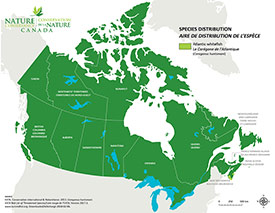 In 2004, the Bluenose Coastal Action Foundation (now called Coastal Action) launched the Atlantic Whitefish Recovery Project to raise public awareness of the species and its dwindling population. The organization continues to work with the federal Department of Fisheries and Oceans (DFO) to stabilize what is left of the population in the Petite Rivière watershed.

There was some good news for this species. In 2018, Halifax’s Dalhousie University took possession of nearly two dozen newly hatched Atlantic whitefish and these fish are now thriving. Raising a captive population is an important conservation strategy to prevent this species from becoming extinct.

The Nature Conservancy of Canada’s (NCC’s) Atlantic Region has developed a freshwater conservation blueprint for the region and is exploring options to support the species’ recovery. This blueprint will help identify where threats to the Atlantic whitefish occur and help assist in planning for its recovery.