The copper redhorse has large, copper-coloured scales, which inspired its name. It is the largest species of redhorse in Quebec, and it also lives the longest — up to 30 years. This resilient copper fish also has quite the bite; as it feeds mainly on clams and snails, it has strong teeth to chomp through their shells. 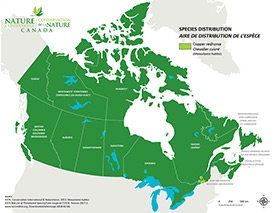 Copper redhorse can be found in only one place in the world: swimming in the waterways of southwest Quebec.

In spring, adult fish swim upstream to the Richelieu River to reach the Chambly Rapids and below the Saint-Ours dam — the only two known spawning grounds for copper redhorse.

What is the status of this species?

Copper redhorse is a globally endangered species. The Committee on the Status of Endangered Wildlife in Canada and the International Union for Conservation of Nature Red List also list copper redhorse as endangered.

The species’ population size is uncertain, but scientists estimate that there are fewer than 1,650 left.

The fish is vulnerable to dams, water pollution and invasive species. The species also tends to spawn later in the season, making its newly hatched young susceptible to lower water levels.

The Nature Conservancy of Canada (NCC) has helped secure the islands and riverbanks of the Refuge faunique Pierre-Étienne-Fortin Wildlife Preserve. NCC has also protected 15 kilometres of riverbed in the Richelieu River, which represents 12 per cent of the copper redhorse’s range.

NCC actively works in close collaboration with the Copper Redhorse Recovery Team from Fisheries and Oceans Canada and the ministère de l’Environnement et de la Lutte au changements climatiques. A key threat to this species’ survival is the deterioration and loss of habitat. To remedy the situation, NCC has undertaken several stewardship activities, in addition to making important property acquisitions.

NCC launched a campaign to re-naturalize the riverbanks in 2006, after having surveyed the banks and meeting with several landowners along the Richelieu River. This campaign is still running strong, and NCC continues to meet with citizens and encourages them to undertake maintenance work on their property.

In the years to come, this project will also extend to the Île Jeannotte and Île aux Cerfs archipelago — the main nursery site for copper redhorse. Doing so will improve the state of their shores and the water quality of the Richelieu River, both of which are priority actions for the protection of copper redhorse and seven are other endangered fish species.

Since the survival of copper redhorse also relies on educating the public, NCC and our partners have installed interpretive panels explaining how to protect this species, along with marker buoys to encourage good practices when navigating the waters.