The Cultus pygmy sculpin is one of the smallest species in the sculpin family. Described by scientists as a dwarf form of the coastrange sculpin, it grows to around only 50 millimetres long in its adult stage. According to scientists, this species of sculpin may be an example of neotonic evolution, meaning they possess the same characteristics seen in a juvenile coastrange sculpin in their adult stages.

Adult Cultus pygmy sculpins have lateral bars on their fins. Spawning males will ditch their usual brown and grey splotchy exterior in favour of a darker brown with a bright orange band along their first dorsal fin. This change is meant to attract spawning females. 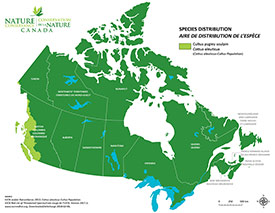 Found in the place after which they are named, this species of sculpin can only be found in the deep waters of Cultus Lake in southwestern British Columbia.

Very little is known about Cultus pygmy sculpins due to their constant seasonal population fluctuation of reproduction, migration and predation. Based on the traits of similar sculpin species, scientists believe Cultus pygmy sculpins will lay egg masses under cobbles on the bottom of Cultus Lake, guarded by the male until they hatch.

The Cultus pygmy sculpin's diet includes chiromonid midge larvae and pupae, ostracods and perhaps smaller cottids. The Dolly Varden, a fish species that also inhabits the deeper waters of Cultus Lake, is one known predator of the sculpin.

According to the Committee on the Status of Endangered Wildlife in Canada, the Cultus pygmy sculpin is considered threatened in Canada. Due to its limited range, this species is susceptible to threats such as competing and invasive species, water quality and habitat loss.

In 2007, a recovery strategy was developed by Fisheries and Oceans Canada and the Province of British Columbia to sustain this species by harvesting individuals and releasing them into the wild.

In British Columbia, NCC is using various techniques to ensure the vitality of fish species and water health. Our first project in British Columbia was the acquisition of Mud Bay in 1974 — a vibrant intertidal property in Vancouver's Boundary Bay. Since then we have completed 100 projects that protect 400,000 (almost 1 million acres) of this province's most ecologically significant land and water.

Our conservation efforts also target the removal and management of invasive species, a large factor in the depletion of the Cultus pygmy sculpin. Recent efforts include the removal of non-native crow garlic from James Island.