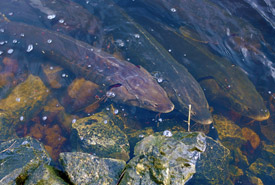 What native Ontario species has rough, plated skin and has survived for more than 200 million years? At first guess, you might be thinking of a type of dinosaur, but you’d be wrong.

Lake sturgeon, nature’s own living fossil, is the correct answer.

Despite its ability to live among the dinosaurs and to survive their extinction, this freshwater species of sturgeon has had less luck cohabiting with its human counterparts. After nearly going the way of the dinosaurs as a result of overfishing and habitat degradation, the good news is that lake sturgeon is now making a comeback that is almost as large as the fish itself. 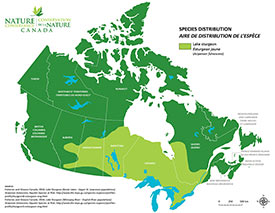 A key problem facing lake sturgeon is the fragmentation of their habitat and the resulting struggle to get to and from their spawning grounds due to obstacles such as dams.

The Nature Conservancy of Canada’s (NCC's) role in the ongoing recovery of the lake sturgeon in the Great Lakes begins with taking a look at the entire picture.

In 2015, NCC, in collaboration with the Nottawasaga Valley Conservation Authority with funding from the Canadian Wildlife Federation, looked at the migratory patterns of lake sturgeon and any roadblocks or dams in the fish’s migratory pathway. The study found that lake sturgeon use specific and limited habitat for spawning within the Nottawasaga River and that the population generally use the same spawning habitat year after year.

This is an important issue for the recovery of lake sturgeon, as it is a migratory species in water, much like birds are on land. Similar to their winged friends, lake sturgeons migrate home to their place of birth in order to reproduce. They use a chemical signature to help them recognize a familiar lake or river, allowing them to migrate to and from that same place throughout their lifetime.

“There’s been some effort to restore habitat for them. I think the major thing NCC can focus on is improving the habitat and making sure that it is actually available for them,” says Kraus. “The major project we’re taking on right now is in the Nottawasaga River and that has one of the most viable populations of lake sturgeon left in southern Ontario.”

This popular yet threatened species has been located in an NCC project area along the Nottawasaga River, within the Minesing Wetlands Natural Area.

NCC also restored banks along Willow Creek and Mad River, which flow into the Nottawasaga River. Holding back soil helps reduce phosphorous that is bound to soil molecules from entering the water. The woody debris serve as anchors for aquatic plants and invertebrates. Together, these organisms use the excess nutrients in the water and help improve water quality. Planted trees also help trap sediment in surface runoff and stabilize riverbanks.

Kraus admits that lake sturgeon offer much more than just excitement to biologists. “From a human perspective, it’s an incredible experience for anyone,” he says. “To just be able to stand on the edge of a river and watch hundreds of century-old fish* coming up to spawn is certainly an experience I would want my kids to have.”

*Female lake sturgeons can live up to 150 years.