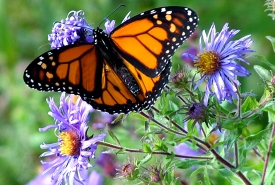 In Canada, monarchs need habitat for breeding, feeding and stopover. Monarchs only breed in habitats with milkweed, the only plants the caterpillars feed on. Asters and goldenrods are particularly important, since they provide nectar during the fall migration. Breeding and feeding habitats can include prairies, meadows, marshes, roadsides and gardens. During migration, monarchs rest in forested areas. They stopover near the Great Lakes and in Nova Scotia before flying across large stretches of water.

Monarchs occur across much of southern Canada, from Newfoundland to Vancouver Island, including in big cities like Toronto, Montreal and Vancouver.

Monarchs that occur east of the Rocky Mountains, by far the largest population, arrive at 12 sites in the Transverse Neovolcanic Belt, a mountain range in central Mexico. They arrive between early November and late December, and form large aggregations of millions of butterflies. 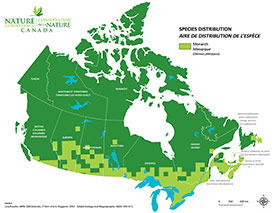 In March, the aggregations begin to break up. They begin their migration north in early April and can travel almost 5,000 kilometres during their long, two-way migration.

Intriguingly, the monarch that returns to its northern habitat is often a generation or two removed from the monarch that started the migration. Only 10 per cent that leave overwintering sites make the full migration north. Lower temperatures and reduced daylight in fall trigger the birth of a generation of long-living monarchs that migrate south to Mexico and California. The migration of the North American monarch is a fascinating journey unlike any other butterfly in the world, which highlights the need for cooperation in species conservation across the continent.

The monarch butterfly is now assessed as endangered by the Committee on the Status of Endangered Wildlife in Canada. The eastern monarch population, estimated to be over one billion in the late 1990s, declined to about 200 million individuals in 2015–2016. A storm in March 2016 killed a large number of monarchs at Mexico’s winter sites.

Monarchs are also threatened by habitat fragmentation and degradation. This is an issue in Mexico’s oyamel fir forests, due to deforestation, but also here in Canada. Loss of milkweed and nectar plants also threaten the monarch’s survival. Climate change is increasing the frequency of extreme weather events, which can impact many monarchs during migration and in their wintering grounds.

The Nature Conservancy of Canada (NCC) has been restoring breeding, feeding and stopover habitats for monarchs across Canada. Since 2011, NCC has been actively restoring habitat for monarchs in Manitoba. This includes planting milkweed and other native wildflowers, and collecting local native seed for future seeding. With the help of Conservation Volunteers, NCC staff conduct monarch surveys.

In Ontario, NCC hosts an annual butterfly count at the Rice Lake Plains, near Cobourg. NCC has also restored 600 hectares (1,483 acres) of former agricultural land on Pelee Island and in Norfolk County. By having protected land available, monarchs and other butterfly species will be able to find food and places to breed. By restoring prairies and savannahs with milkweed and other wildflowers, monarchs will have a better chance at survival. You can help by planting late-flowering native plants and milkweed in your garden.