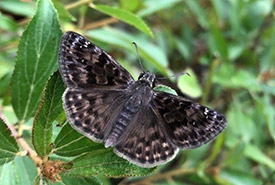 A medium-sized butterfly of the skipper family, this species has a wingspan between 20 and 30 millimetres and a dark grey/brown body. It has yellow-brown spots on its hind wings, which distinguish it from other duskywing species. The wings of freshly emerged adults have a purplish hue.

What is its range and habitat? 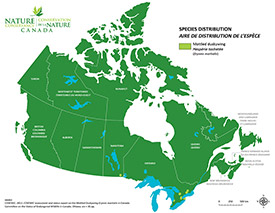 Mottled duskywings are found in small, local populations throughout eastern and central United States, Ontario and Manitoba. The species is extirpated (locally extinct) in Quebec, and severe population declines have been observed in many places in the U.S. It does not migrate and remains in the same habitat throughout its life cycle.

Like many butterflies, the mottled duskywing is selective about where it lives and what it eats. In Manitoba, the larvae feed on prairie redroot. In Ontario, the species also feeds on the closely related New Jersey tea. These plants are usually found in dry habitats, such as tall grass prairie and oak savannah.

In 2012, the Committee on the Status of Endangered Wildlife in Canada assessed the mottled duskywing as endangered. It is rare in Ontario and Manitoba, and already gone from Quebec. The Province of Ontario announced a recovery strategy in 2015, which aims to manage threats to mottled duskywing habitat and stabilize the population.

The mottled duskywing is the only oak savannah specialist butterfly left in Ontario. Two other savannah species, frosted elfin and Karner blue, are now gone.

Perhaps surprisingly, suppression of naturally occurring fire threatens the mottled duskywing’s habitat. Fire limits the growth of species that crowd out the plants that the mottled duskywing relies on. Shrubs, trees and invasive plants can crowd out native species if unchecked, changing grasslands and savannahs into forests. The Nature Conservancy of Canada (NCC), under certain conditions, uses prescribed burns to help protect and reclaim these areas.

The tall grass landscape survives in the Rice Lake Plains Natural Area in southern Ontario, about an hour east of Toronto. Since 2002, NCC has helped lead the Rice Lake Plains Partnership (RLPP). The RLPP is a collective made up of landowners, members of the Alderville First Nation, government and conservation groups, that works to protect this area of sandy hills, oak savannahs and grasslands.

With the support of hardworking volunteers, NCC and the RLPP are fighting against invasive species, such as Scotch pine, through the use of cutting, uprooting and controlled burns. Seeding and planting projects are helping establish more prairie and oak savannah.

In 2021, there were a total of 124 mottled duskywing sighted on NCC properties in the Rice Lake Plains.

With cooperation between partners and communities, the Rice Lake Plains Natural Area shows the difference we can make when we work together to protect our most vulnerable species and landscapes.