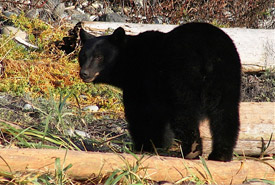 Contrary to popular belief, black bears are not true hibernators. While the black bear does not have to eat or eliminate waste, unlike many small mammal hibernators, bears can wake up and wander around for short periods during the winter months if the weather becomes uncharacteristically warm.

As the name suggests, this member of the bear family most commonly has black fur. However, brown, cinnamon, blue-black and even white bears can be found throughout its extensive range. Adult males weigh about 297 lbs, while females are much smaller, averaging 154 lbs. 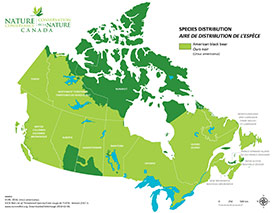 The species occupies approximately 60 per cent of its historical range throughout North America, from northern Canada to Mexico. In wilderness areas black bears are usually active from dawn until dark. Those living near may be mainly nocturnal to avoid contact with people.

Black bears are omnivores. They eat a wide variety of foods, including insects, berries, nuts, fish and even small mammals and birds.

While the black bear is not an at-risk species, it still needs safe places to roam. Large protected properties, such as those within Sutton Mountain Range in southern Quebec and the Frontenac Arch in eastern Ontario, make this possible.