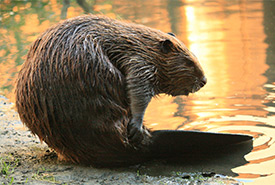 The largest rodent in North America, an adult beaver can weigh up to 32 kilograms and measure up to 1.3 metres long — including its tail.

To waterproof themselves, beavers rub castor oil, produced from a gland near their tail, through their fur using their split toenail (grooming claw).

Beavers are herbivores. Their main food source includes tree bark and cambium, the thin layer of tissue that grows just under the tree's bark.

Beaver’s teeth contain iron-rich enamel (which explains the orange-colour). This allows it to chop easily through wood.

Beavers are native to Canada and have been considered Canada's national icon for 300 years.

However, they were once endangered throughout much of their range due to over-hunting for their thick fur. Thanks to conservation efforts, reintroduction and better protection of floodplain habitats, they have made a remarkable comeback over the last century. In Canada, they are found in rivers, creeks and lakes. They have even been observed in creeks and rivers within many major cities.

Beavers remain active throughout the winter and can swim under the ice. They are able to hold their breath underwater for up to 15 minutes due to their specialized lungs and by lowering their metabolism. Beavers also mate in January and February.

Sometimes referred to as ecosystem engineers, beavers are one of only a few mammals capable of changing a habitat.

Beavers construct their lodges or homes, which can only be accessed through underwater entrances, in ponds, along river edges or in the shallow bays of lakes.

The dams that beavers build create shallow ponds. It is here where they will build their lodge. When the beavers abandon the dam due to factors such as lack of food and the pond drains, beaver meadows often form. These beaver-made ecosystems, in turn, help protect and filter our drinking water, provide habitats for wildlife, store flood waters to reduce property damage and maintain surface water flow during droughts. Beaver dams function as speed bumps for streams. By slowing down the speed of moving water they create deeper water that can provide important habitat for fish during times of drought.

Beaver-made ponds and wetlands are incredibly important for waterfowl nesting and feeding and many types of fishes. Ponds not only create open water and wetland habitat for ducks, but the flooding often kills large trees, creating habitat in which species, such as wood ducks (cavity dwellers), nest.