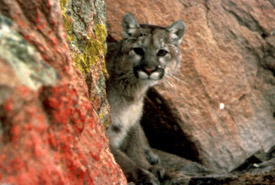 The cougar is one of the largest and most powerful predators in North America. A large male cougar can measure up to 2 metres (eight feet) in length and weigh more than 90 kilograms (200 pounds).

When do cougars mate?

They are solitary animals, except during the mating season. Their cubs may be born at any time throughout the year, although they are most likely to be born during the spring.

Generally, cougars are found in mountainous terrain or rocky outcrops, but they may also be present in a wide variety of habitats, including coniferous forests and swamps. They make their homes in caves or crevices in rocks, or other shelters such as in overhanging banks or trees.

These majestic cats require significant unbroken stretches of habitat, as a cougar's territory may be as broad as 50 square kilometres, depending on prey density.

Cougars are nocturnal hunters. Their prey usually consist of larger animals such as deer and elk, although they do also feed on smaller mammals.

Although it once boasted the broadest distribution of any mammal in the Western hemisphere, the cougar's range has been greatly reduced or eliminated in certain regions due to habitat loss and human disturbance.

By protecting large ranges of habitat in Western Canada, such as Tatlayoko Valley in British Columbia and Waterton Park Front in Alberta, the Nature Conservancy of Canada is helping to ensure that the cougar has room to roam.