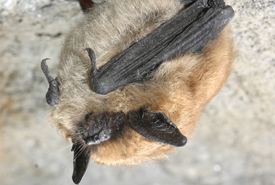 The eastern small-footed bat is one of 18 bat species in Canada. As its feet measure only seven to eight millimetres in length, this species’ name is apt. Its fur's black roots and glossy, light brown tips make it appear yellowish-brown overall. Its underside is grayish-brown and its wings, ears and face mask are black. It is about eight centimetres long, weighs around four to five grams and has a wing span of 21 to 25 centimetres.

The eastern small-footed bat is found throughout eastern North America, including southeastern Ontario and southwestern Quebec. It is found in mountainous or hilly areas within or close to deciduous or evergreen forests. It is also occasionally found in mostly open farmland.

In spring and summer, it roosts in crevices or underneath rocks, in rock outcrops, buildings, below bridges or in caves, mines and hollow trees. It switches roost spots daily. During winter, it hibernates most often in caves and abandoned mines, returning to the same spot every year.

The eastern small-footed bat is endangered in Ontario, mainly due to white-nose syndrome, a fungus that thrives in cool, moist environments and infects the exposed skin of the muzzle and wings of hibernating bats. The fungus causes bats to use more energy than they can afford during hibernation and wake up more frequently than healthy bats, often resulting in their death. Fortunately, this species of bat may be less vulnerable to the disease because it prefers hibernating in cooler, drier parts of caves and mines where the fungus may be less viable.

Other threats to this species include the destruction of hibernation sites, as well as harm from wind turbines. The pressure change produced by the rotating turbine blades can cause lethal barotrauma (injury from air pressure changes) to bats flying nearby. It is likely that barotrauma causes more bat deaths than direct strikes from turbines.

At present, little is known about the eastern small-footed bat, and it is more difficult to detect acoustically than other bat species. Because of this, it has not yet been documented on any NCC properties. However, NCC protects potentially suitable habitat for this species, such as in the Bruce Peninsula and along the Niagara Escarpment in Ontario.