It’s an icy mid-winter day in Algonquin Park, Ontario. In the middle of one of the park’s numerous frozen lakes lie the remains of a deer. A bald eagle circles overhead and then, gliding gracefully, lands beside the kill as an eastern wolf silently lopes away.

A rare sight, admits Dan Kraus, the Nature Conservancy of Canada’s (NCC’s) conservation science manager for the Ontario Region. Most only ever hear the elusive carnivore, he explains. Few are lucky enough to catch a glimpse of it. 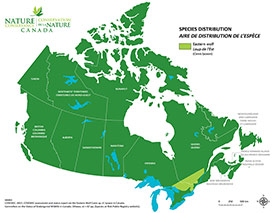 Smaller than other wolves, the eastern wolf weighs between 20-35 kilograms. Found in the forests of the Great Lakes and St. Lawrence regions of Quebec and Ontario, this mottled brown canine preys primarily on white-tailed deer and moose.

Due to loss of habitat, hunting and trapping , the eastern wolf is now a species of special concern. Possible breeding with coyotes may also pose a threat to the genetic integrity of the species. This poses a unique challenge to conservation efforts, Kraus points out.

“With eastern wolves the challenge is figuring out if you are actually dealing with pure wolves, which are a species at risk, or with coyote–wolf hybrids, which are more common.”

NCC’s Ontario Region is working to protect key wolf habitat in the Frontenac Arch Natural Area. “The Frontenac Arch is one of the major linkage projects we’re working on. It’s part of the Algonquin to Adirondack (A2A) mountain corridor,” explains Kraus. Extending from Algonquin Park to Adirondack Park in New York State, A2A is an important ecological corridor that connects the boreal forest with the Appalachian Mountains.

Kraus stresses the importance of this corridor and coordinating conservation efforts on both sides of the border so that “our work lines up with what they are doing on the U.S. side.”

Apart from scat and tracks, Kraus has yet to see any wolves in Frontenac Arch. By conserving cross-border connections and helping to increase protected lands in the Frontenac Arch Natural Area, NCC and its partners may help ensure the eastern wolf will have the land it needs to roam and thrive.