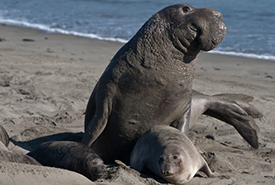 Elephant seals are named for their most defining feature: their large noses, which resemble an elephant’s trunk.

They are the largest member of the pinniped family, a group that includes other seals, sea lions and walruses. On land, they move slowly due to their size, with adult males weighing up 2,000 kilograms. Males can weigh up to five times more than adult females, who can weigh up to 600 kilograms. Their offspring, known as pups, are born weighing an average of 30 kilograms.

Northern elephant seals live along the Pacific coast in North America, including British Columbia, ranging as far north as Alaska and as far south as Mexico. They spend about nine months in the ocean, occasionally hauling out on beaches to rest. They migrate to California and Baja California, primarily on offshore islands, to breed and rear their pups between December and March.

Elephant seals take their time moving on both land and in water. This species can dive to extreme depths for extended periods of time compared to other seal species. Adults can reach depths of nearly one kilometre and can stay under water for up to 30 minutes at a time.

Northern elephant seal was almost extinct due to commercial hunting for its oil in the 1800s. Thanks to protection across North America, its population has bounced back to a place where the species is no longer at risk.