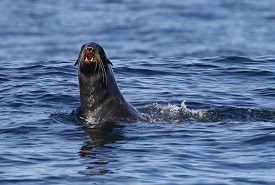 Found along the coasts of Japan in the western Pacific, across the Bering Sea linking Russia to North America and as far south as California, the northern fur seal is the most widely distributed and abundant seal in the north Pacific Ocean.

The northern fur seal exhibits extreme physical difference between males and females of the species. Male seals can be measure as long as two metres and weigh 100 to 200 kilograms, while females average 1.3 metres in length and weigh 35 to 45 kilograms.

The species is characterized by a thick double-layered coat of fur, with darker guard hairs that molt in summer to reveal cream-coloured underfur. The female's outer fur is grey-brown in colour, while males can range in colour from black to reddish brown. 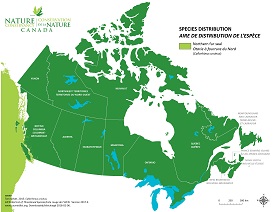 Northern fur seals are highly migratory and spend most of their life at sea. From June to November, they give birth to their pups and breed on six islands in Alaska and Russia. They then spend the remainder of the year foraging in offshore waters as far south as California.

Within Canada, northern fur seals are assessed as threatened by the Committee on the Status of Endangered Wildlife in Canada. This hints at a larger global decrease in the species’ population, as recognized by the IUCN Red List, where the species as a whole is listed as vulnerable. Once widely hunted, and on the verge of extinction, northern fur seals have made a remarkable recovery. Their main threats today are changes in food availability from unsustainable fisheries and climate change.

The Nature Conservancy of Canada (NCC) works to protect habitat throughout the islands and waterways of BC’s coast. These conservation efforts help ensure heathy coastal ecosystems and fish stock, such as pacific salmon, which northern fur seals feed on.