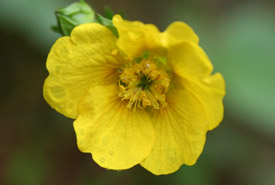 If you visit Brier Island in Nova Scotia you may see a delicate plant growing at the edge of several bogs. Small and fragile, it may not be well known, but the eastern mountain avens is, in fact, one of the most endangered plants in Canada. And now, the Nature Conservancy of Canada (NCC) is helping change this. 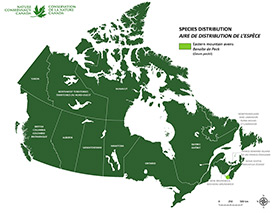 Where are eastern mountain avens found?

A member of the rose family, this yellow flower exists in only two isolated populations — along streams in the alpine meadows of the White Mountains in New Hampshire and in the coastal peatlands of Brier Island and Digby Neck, Nova Scotia. The Canadian population of eastern mountain avens represents a quarter to a third of the global population. Roughly a third of the Canadian population can be found on NCC’s property on Brier Island in southwest Nova Scotia.

In the last 20 years, eastern mountain avens has declined by almost 50 per cent, due to changes in its habitat. In Canada, the species is listed as endangered both federally and provincially.

To date, NCC’s work has focused on outreach and engagement with the local community, through communications and the distribution of interpretive materials, about the species by alerting them to its presence on Brier Island. NCC has also created trails on the property designed to steer visitors away from eastern mountain avens habitat. Jaimee Dupont Morozoff, Nova Scotia program manager with NCC and a member of the Eastern Mountain Avens Recovery Team, believes NCC is now poised to play a more active and strategic role in the protection of this endangered plant.

NCC has teamed up with the Mersey Tobeatic Research Institute in a partnership that Craig hopes will study the entire Canadian population of eastern mountain avens. If funding is approved (under the federal government’s Habitat Stewardship Program), the project will allow Craig and his team to gather information that will help decide how to better protect it from threats to its habitat.

So, as spring returns to Brier Island and the first flowers of the eastern mountain avens unfurl, its yellow petals signal a sense of hope that this little plant will continue to survive and thrive due to the efforts of NCC and our dedicated conservation staff.

To learn more read the recovery strategy for the eastern mountain avens here.