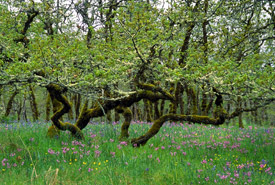 Many species of oak exist worldwide. Approximately 500 species of Quercus oaks have been identified by taxonomists, of which 95 occur in North America. 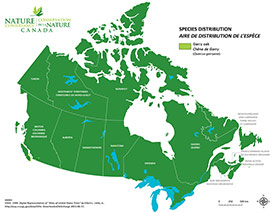 Garry oak is the only species of oak that is native to British Columbia. Its range is limited to a very narrow strip of sub-Mediterranean rain-shadow climate that extends down the eastern margin of Vancouver Island and throughout the southern Gulf Islands in BC, as far south as the San Joaquin valley in California.

Lowland oaks often grow in seasonally flooded areas, occasionally with wet-adapted species such as skunk-cabbage, while in dryer areas they can be found growing next to native brittle prickly pear cactus.

The trunk and limbs of Garry oak are almost always covered in a thick, patchy layer of moss, which provides habitat for many species of insects. These provide food for a wide variety of birds, such as brown creeper and red-breasted nuthatch.

Garry oaks occasionally drop large limbs, exposing areas of rot in their trunks that are quickly adopted as shelters by woodpeckers and cavity-nesting songbirds.

Every single plant community identified with Garry oak is listed in British Columbia as "critically imperiled."

The Nature Conservancy of Canada's (NCC's) Cowichan Garry Oak Preserve in Maple Bay (Vancouver Island) is one of the best remaining examples of this ecosystem left in the world.