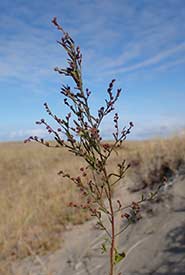 It might be easy to overlook the Gulf of St. Lawrence beach pinweed, as it grows from a dense cluster of hairy leaves that remains close to the ground. By mid-summer, 20- to 35-centimetre stalks covered with small, reddish-brown flowers shoot up. Most plants that flower appear to be at least eight years old.

Gulf of St. Lawrence beach pinweed is a highly specialized beach dune species. It does not grow in the active foredunes that often have dense stands of American beachgrass. Instead, it grows in the sheltered parts of the dune that are stable and often where beach heather and bearberry grow. This plant can tolerate some shade, but becomes sparse in the back areas of dunes that support jack and red pine.

Gulf of St. Lawrence beach pinweed has been assessed as a species of special concern by the Committee on the Status of Endangered Wildlife in Canada. Over 60 per cent of the population occurs within protected areas. The Mi’kmaq Confederacy of PEI and the Lennox Island First Nation are working with conservation agencies to protect a large population on Hog Island, PEI. The species’ habitat can be managed through visitor education and community outreach. A seed bank is also being established to ensure there will always be a source to reintroduce this significant plant, should any of its occurrences be lost.

Dune habitats are threatened by rising sea levels, habitat loss and disturbance. Most populations of Gulf of St. Lawrence beach pinweed grow at fewer than five metres above sea level. As storm surges increase due to extreme weather events and rising sea levels, critical sites could be lost. Some dune habitats have also been lost to coastal development. Trampling and erosion from recreational use and off-road vehicles can also occur in dune habitats.

Dune habitats are not just critical for the endemic Gulf of St. Lawrence beach pinweed. They provide a natural breakwater to protect local communities, farmlands and wetlands from storm surges. Dunes can also be  important groundwater recharge areas (areas where water drains into underground aquifers) and provide habitat for many other species. There are many examples from around the world of where dune removal has led to catastrophic losses of property and even casualties.

What is NCC doing to conserve the habitat of this species?

Since 2011, the Nature Conservancy of Canada has protected 202 hectares (500 acres) in PEI’s Cascumpec and Conway Sandhills. Besides providing habitat for the Gulf of St. Lawrence beach pinweed, these properties are in an internationally recognized Important Bird Area and feature critical nesting areas for endangered piping plovers. This work has been supported by funding from the Government of Canada’s Natural Areas Conservation Program and the Ecogift Program. The American Friends of Canadian Nature (previously Friends of the Nature Conservancy of Canada) and many private donors also contributed generously.

The future of the Gulf of St. Lawrence beach pinweed should look bright, except for the fact that it lives in an area that is vulnerable to rising sea levels. Climate change could result in a two-metre increase in sea levels by 2100. Protecting and restoring the dunes where this endemic plant grows has never been more urgent.