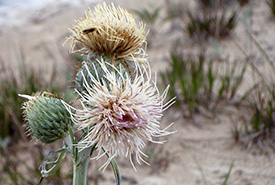 Also known as dune thistle, Pitcher's thistle is surprisingly smooth compared to some of the more common thistles. This plant spends most of its life as a ring of whitish-green leaves, measuring from 15 to 30 centimetres in width, while growing a taproot up to two metres long.

After four to 12 years, it matures to produce a long, flowering stalk up to one metre tall, with pinkish-white flowers. The flowers are a nectar source for bees and other insects. Once it has flowered, Pitcher’s thistle sets its seeds and then dies. The seeds are carried long distances by the wind on downy-white fluff. 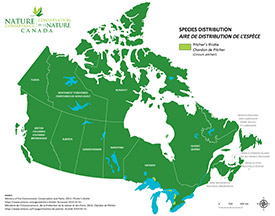 This species’ global population is endemic to the windblown, sandy shorelines of the upper Great Lakes, from Lake Huron and Lake Michigan to Lake Superior. In Canada, Pitcher’s thistle is found only in Ontario and is restricted to approximately 30 sites.

Since 2010, this plant has been designated as a species of special concern by the Committee on the Status of Endangered Wildlife in Canada.

Pitcher’s thistle grows only on sand dunes and beaches, making it vulnerable to human activity, such as shoreline development, trampling and off-road vehicle use. This species is also impacted by invasive species, such as phragmites and the spread of woody plants into its habitat.

NCC is leading an international effort, which began in 2012, to conserve habitat on Cockburn Island. Cockburn Island is part of the Manitoulin Island Archipelago in northern Lake Huron, and it supports a largely intact ecosystem. In 2018, NCC staff and volunteers carried out botanical inventories on the island’s shoreline. They documented a population of more than 600 Pitcher’s thistle plants — one of the largest populations in Ontario. To date, NCC has protected 10,743 hectares (26,535 acres) on Cockburn Island, representing more than 60 per cent of the island.

NCC also protects Pitcher’s thistle and its habitat on several nature reserves on Manitoulin Island. NCC is also working with local partners to control invasive phragmites on our lands on Cockburn and Manitoulin islands.