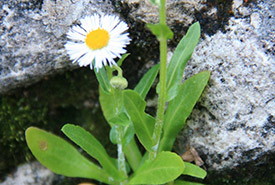 Bearing yellow and white flowers, Provancher’s fleabane looks like the common daisy, as it is part of the daisy family. Don’t be fooled by its appearance; what appears to be one flower is actually made up of many flowers. Together they form the flower head, which is composed of two types of flowers: ray flowers and disc flowers.

Ray flowers are “petal-like,” forming the white, elongated flowers that spread from the edges of the yellow-coloured centre. Disc flowers are located in this centre. Tiny and yellow, each little bump in the centre is a single flower. This conglomeration of flowers grows atop a delicate rosette of leaves. The plant can grow up to 12 centimetres tall. 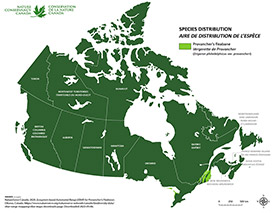 When does it grow?

Provancher’s fleabane starts to grow in May, followed by a long flowering period that begins in June and ends in the fall.

After flowering is complete, the species depends on insects for pollination. The resulting seeds are dispersed by wind or water to their next growing location.

Habitat loss as a result of human activity, such as landfilling, road construction or port construction, is the main threat to Provancher’s fleabane populations.

Provancher’s fleabane is assessed as a species of special concern by the Committee on the Status of Endangered Wildlife in Canada. This plant is globally rare.

NCC has protected habitat for this species in the freshwater estuary natural areas in Quebec.