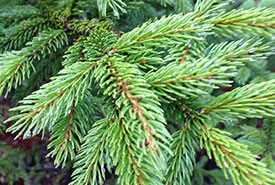 Red spruce is a medium-sized conifer and the provincial tree of Nova Scotia. It can live for more than 400 years. Some trees can grow up to 25 metres in height, with a trunk diameter of 60 centimetres at the base. The red spruce’s conical-shaped crown extends almost all the way to the ground, providing important winter shelter for wildlife.

Red spruce can be identified by its four-sided, curved, yellow-green needles, which measure 10 to 16 millimetres in length. Mature trees produce three- to five-centimetre-long dark brown, oval cones with loose, widely spread scales that open during the fall. Red spruce bark is reddish brown in colour and separates into scales or plates as it ages.

The species can be found throughout Nova Scotia, PEI and New Brunswick. Smaller populations are found along the St. Lawrence River in Quebec and in Ontario’s Algonquin Highlands region. Red spruce occupy moist, well-drained soils and thrive at higher elevations, such as those found throughout the Acadian forest region.

Red spruce’s low-hanging boughs provide important winter habitat for moose, deer and other species seeking respite from deep winter snows. As the tree’s cones open in the fall, squirrels and birds, such as white-winged crossbills, black-throated green warblers and pileated woodpeckers, rely on the seeds contained within to stock up for the winter months.

While red spruce is listed as least concern by the International Union for Conservation of Nature, the species is particularly susceptible to wind damage events and the effects of acid rain. Development and heavy use in the lumber industry mean that old-growth red spruce forests are becoming increasingly rare throughout the Maritimes.

Although only five per cent of all mature forests along Canada’s eastern coast remain, the Nature Conservancy of Canada (NCC) is taking steps to protect old-growth forests in the region and, in particular, red spruce stand like those found on the Abraham Lake Nature Reserve. NCC works closely with communities and volunteers throughout the Maritimes to conserve and promote the growth of red spruce and the biologically rich Acadian forest in areas such as Riverside-Albert and Percival River.