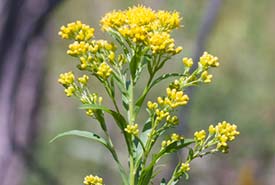 Often confused for a weed, this plant, with its showy yellow flowers on tall stems, is a common sight in late summer and early fall.

Riddell’s goldenrod blooms in the fall, with clusters of bright yellow flowers on round and flat-topped clusters. Each stem can reach up to one metre in height, and its long, narrow leaves have a winged stem. It can be distinguished from other goldenrods by its distinctive curved and unfolded leaves. Part of the aster family, goldenrods are vascular perennial plants. Most of the 100-plus species (and dozens of hybrids, varieties and subspecies) are found only in North America.

It doesn't make you sneeze!

Although many people accuse goldenrod as the cause of their allergies, this is not the case. Unfortunately, it flowers at the same time as common ragweed, which is the real culprit.

Goldenrod’s yellow flowers provide an abundant source of nectar for bees and butterflies, and are a reliable pit stop for monarchs on their annual migration to Mexico. Goldenrod also hosts a fly that lays its eggs in the stem. These eggs, and the resulting larvae, cause the goldenrod host to form a gall — a hard ball on the stem — where it remains over the winter, providing the bird-equivalent of a protein bar for many winter birds.

The more than 30 goldenrod species found in Canada occur in almost every type of habitat, including bogs, prairies, forests, along rivers and on the tundra. There may be no other group of flowering plants that has evolved to embrace and adapt to the diversity of Canada better than goldenrod. Although some species of goldenrod are very common, and even “weedy,” this diverse group actually includes a few that are at risk, including Riddell’s goldenrod. This species is an example of the many at-risk species associated with the tall grass prairie.

Riddell’s goldenrod can be found in open tall grass prairie, wet prairie, roadside ditches and railway corridors. There are fewer than 50 known sites in Canada. Here, Riddell’s goldenrod is restricted to tall grass prairie remnants in southwestern Ontario and southeastern Manitoba. It is also found across the mid-west United States, south to Arkansas and Georgia. It is rare in many states across its range in the U.S.

In the Manitoba Tall Grass Prairie Preserve, Nature Conservancy of Canada staff have been engaged in ongoing monitoring and management work for the species. Its conservation needs include the protection and stewardship of the tall grass prairie and prairie restoration projects. Management activities include prescribed burns, grazing, haying, removal of invasive, non-native species and prairie restoration. Riddell’s goldenrod has been planted in tall grass restoration locations in southern Ontario, and in Manitoba this species has been found in at least one site after restoring the site to prairie.