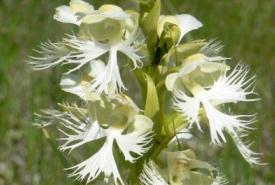 The elusive western prairie white-fringed orchid is an endangered species found in one of the rarest ecosystems in North America — the tall grass prairie.

The orchid is named after its geographic location, as well as its physical appearance. The flower spike, which can be up to 88 centimetres high, consists of between four to 30 creamy white flowers, each with a fringed lower petal. 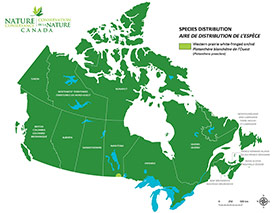 The flower can be found in southeast Manitoba, along with seven mid-western states. In Manitoba, it can be found in calcium-rich, or alkaline, prairies and wet meadows. Although it is mainly found in undisturbed areas, the orchid can also be seen growing in roadside ditches. Approximately 50 percent of all known plants occur in a 48-square-kilometre area west of Vita, Manitoba.

The western prairie white-fringed orchid is a perennial, surviving from one year to another as an underground root. This is a thick stem that the flower grows from, much like that of a potato plant.

The lower flowers on the spike open by the third week of June, with the remaining flowers usually blossoming within the following three weeks. Flowers last for several days and are larger relative to other orchids found in Manitoba.

The orchids release their fragrance at night to attract the nocturnal sphinx moth – one of the orchid’s primary pollinators. Seed capsules mature by late August or early September. Successful germination requires the assistance of a special type of soil fungi that helps the plant absorb nutrients.

The greatest threat to the western prairie white-fringed orchid is habitat loss. The conversion of tall grass prairie into cropland, incompatible mowing, fire suppression, incompatible grazing and filling in wetlands are some of the factors that threaten this species’ habitat.

The species is also highly dependent on the sphinx moth for pollination. Any threat to these insects, such as the use of insecticides, is also a threat to the orchid.

The Nature Conservancy of Canada (NCC) has secured a significant portion of the western prairie white-fringed orchid habitat in Canada. We manage this by using prescribed fire, prescribed grazing and prescribed haying. NCC is currently studying the water movement patterns of the wet prairies that the species uses.

NCC also acquired a 65-hectare (160-acre) property containing a two-story house on Manitoba’s tall grass prairie. The house has been converted into The Weston Family Tall Grass Prairie Interpretive Center, where visitors can learn about species found in the area, including the Western Prairie Fringed Orchid. The flower can be seen first hand at the interpretive centre.