Blanding’s turtles are easily identified by their yellow chin and throat and bulging eyes. They have large domed, brown- to black-coloured upper shells (carapaces) that can reach up to 28 centimetres in length. They often have tan or yellow markings, but these may be faded or absent in some turtles. Their lower shell (plastron) is yellow with large dark blotches on the outside.

Where is the Blanding's turtle found? 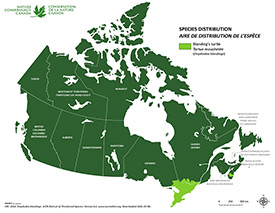 There is a disjunct population of Blanding’s turtles in Nova Scotia, but most of the species Canadian range is in southern Ontario and western Quebec and occurs in some cities and towns such as Ottawa.

Their preferred habitat is restricted to lakes, beaver ponds and wetlands with shallow water and mucky bottoms. They hibernate in this mud in the winter and enjoy basking in the sun in the spring. Blanding’s turtles travel several kilometres between summer and winter habitat.

What is the Blanding's turtle's conservation status?

The Great Lakes/St. Lawrence and Nova Scotia populations of Blanding’s turtles are both assessed by the Committee on the Status on Endangered Wildlife in Canada (COSEWIC) as endangered. Threats to this species include wetland habitat loss, motor vehicle collisions and illegal collection for the pet trade. Racoons and foxes are nest predators.

What is NCC doing to protect the Blanding's turtle's habitat?

In Quebec, NCC has conserved properties where Blanding’s turtles occur in the Outaouais region, specifically in the Bristol and Clarendon lowlands and on Isle-aux-Allumettes. Beavers ponds account for approximately 90 per cent of the Blanding’s turtle’s habitat!  In building their dams, beavers create bodies of water where there used to be only streams, creating an ideal environment for Blanding’s turtles. By settling on top of the dam, these turtles can even sunbathe, which is necessary for their survival. To avoid dismantling beaver dams that can cause flooding, NCC is involved in installing sustainable and practical solutions, a pipe system that naturally regulates river levels without destroying those habitats.