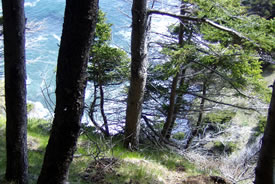 Located on the east coast of the Island of Newfoundland, the Avalon Peninsula was one of the first areas in North America to be colonized by Europeans in the seventeenth century, with the first permanent colony established at Cuper’s Cove in 1610. Today, it is home to more than half of Newfoundland’s population.

Within this storied land grows the fog forest — North America’s most easterly forest. It is also one of the most threatened and unique forests in North America.

The uniqueness of this forest stems from its very moist climate, resulting from the very high fog frequency of approximately 200 days each year. This, in addition to its ribbed moraine topography, results in a high diversity of species.

The fog forest covers almost the entire Avalon Peninsula. It is bounded to the north and south by the treeless Eastern Hyper-oceanic Barrens ecoregion, and to the east by the coastline (including Cape Spear, the most easterly point in Canada).

The fog forest is characterized by mostly balsam fir forest types, mixed with other species, such as black spruce and yellow birch. This region also provides habitat for the most southern woodland caribou herd in Canada.

The diversity of habitat cover along the fog forest coastline supports an extensive list of species, including an unusually high number of arboreal lichens, such as the endangered boreal felt lichen and blue felt lichen, which is rare in the area. There are large numbers of waterfowl and small mammals, forest birds and seabird colonies. Several marine birds breed in the fog forest, including:

The coastlines of the fog forest provide important wintering areas for sea ducks, such as harlequin duck and common eider, as well as migrating shorebirds, such as purple sandpiper.

The Salmonier River that runs through the mature forest in this ecoregion is one of the most well-known rivers in eastern Newfoundland and boasts a healthy population of Atlantic salmon.

The forest is subject to considerable stress from wind and the threat of clear cutting would increase the amount of wind damage to the forest. Additional threats in this area include increasing urbanization, pollution and industrial development.

NCC has protected 11 acres (5 hectares) in Petty Harbour-Maddox Cove and 158 acres (64 hectares) along the Salmonier River on the Avalon Peninsula and is working with partners to conserve habitat within the Fog Forest Natural Area.

TD Forests is helping to protect forests across Canada.

Learn more about this partnership here >