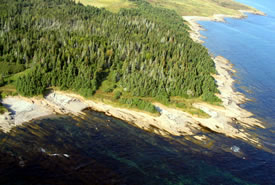 Padding softly through the forest Maritime mixed forest on the Gaspé Peninsula, a Canada lynx is on the hunt for rabbits. Although it is seldom seen, it is recognizable by the long tufts of fur on its ears and its back legs, which are typically longer than a bobcat's. The lynx's large paws are covered in thick, coarse hair, with toes that spread out and function much like snowshoes on snow. These large paws allow the Canada lynx to live in a more northerly habitat than the bobcat, where it hunts in deep snow.

The Canada lynx is just one of the animals that rely on large swaths of Maritime mixed forest for its survival. Stretching along the coasts of eastern Canada, including the Gaspé Peninsula, New Brunswick and Nova Scotia. Much of the forest is exposed to the harsh climate of the Atlantic coast.

What is an example of a Maritime mixed forest?

The Maritime mixed forest includes some forests that are more than 80 years old. 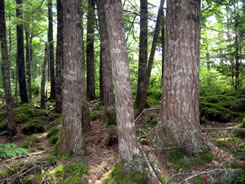 What animal species are found here?

The Maritime mixed forest  provides habitat for many mammals that require extensive forested landscapes, including:

In addition to terrestrial wildlife species, several species associated with wetlands use the forest environment to move around, to feed, hibernate and breed.

What ecological functions does this forest play? 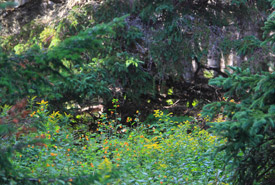 In addition to containing rare forest groups and providing habitat for countless bird and mammal species, the Maritime mixed forest is essential to protecting the quality of rivers, streams and coastal wetlands located downstream from these areas.

This is a vast forest ecosystem that traditionally provided habitat for wide-ranging mammals.

In Nova Scotia, coastal forests are an important and rich interface with intertidal habitats. They provide habitat and food sources for a wide range of species, including migratory birds and  nesting seabirds and enrich estuaries for marine and intertidal species.

The Maritime mixed forest is the focus of much of the Nature Conservancy of Canada’s (NCC’s) work in Quebec, New Brunswick and Nova Scotia.

In 2013, NCC protected the Green Point property in Quebec, in collaboration with TD Forests.

More on the Green Point property >

In March 2014, NCC protected the Stehelin property in Nova Scotia, thanks to a generous donation from the Stehelin family and TD Forests.

More on the Stehelin property >

NCC has also protected the Chignecto Isthmus property in New Brunswick, thanks to support from TD Forests.

More on the Chignecto Isthmus >

In July 2015, NCC has protected the Malbaie River property in Quebec, thanks to support from the Government of Canada and TD Forests.

More on the Malbaie River property >

In April 2016, NCC has protected the Docherty's Brook property in Nova Scotia, thanks to support from the Government of Canada, TD Forests and other partners.

More on the Docherty's Brook property >

In April 2016, NCC has protected two forest sites in the Percival River area in Prince Edward Island, thanks to support from the Government of Canada, TD Forests and other partners.

More on the Percival River property >