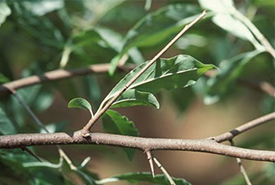 Autumn olive is a deciduous shrub or small tree. Native to China, Japan and Korea, it was introduced to North America in the 1830s and has since become established.

Autumn olive, along with several other non-native invasive shrubs, was planted in southern Ontario in the 1970s by well-meaning land managers thinking that they would provide excellent wildlife habitat. However, we now have a better understanding of ecological systems. Our native wildlife has evolved with the species that grow naturally in a given area, and do not need additional food sources. Furthermore, although autumn olives do produce a lot of food for birds at one point in the year, they do not provide much habitat for native insects, which much prefer (and may be completely dependent on) our native shrubs and other plants to complete their life cycles.

Autumn olives grow vigorously and fast, becoming quite tree-like in only two to three years (in southwestern Ontario). They can form dense thickets quite rapidly, through a combination of this vigorous growth and prolific seed production. The dense growth hinders the development of native plants that require lots of sunshine. The roots are capable of fixing nitrogen, giving it the ability to thrive on infertile soils. This also means that autumn olives change the chemistry of the surrounding soil, often making conditions suitable for the establishment of other non-native invasive species.

This invasive species is considered a “prohibited noxious weed” under the Alberta Weed Control Act 2010.

Because of its silver foliage, fragrant flowers and abundant fruit, autumn olive is sometimes used as an ornamental shrub. The leaves on this plant grow alternately along the stem. They are elongated and narrow with a wavy margin. When the leaves emerge in early spring they are covered with minute white–silver scales that wear off the top of the leaves during the summer.

Autumn olives flower in early spring. Their flowers grow in clusters all along the branches and are pale yellow to white in colour. When ripe, the fruit is red with silver or brown dots. A single plant can produce up to 200,000 seeds per year, which are often dispersed by birds.

Autumn olive grows in open areas and tolerates some shade but is mostly absent from closed canopy forests. It can grow in a variety of soils, including both sand and clay.

NCC has been systematically eradicating autumn olive from properties in Norfolk County in southwestern Ontario through cutting and herbicide application. Similar work has been done in Chatham–Kent, and NCC will begin to tackle a population on Pelee Island in fall 2014.

The best way to deal with autumn olive is to hand-pull seedlings before the plants bear fruit. Once they become too large to pull, these plants can be cut down. However, in order to prevent them from resprouting, herbicides need to be applied immediately to the cut stump.