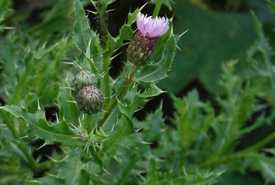 Despite its name, this invasive thistle is not from Canada. It is believed to have come from the eastern Mediterranean region and was likely one of the first weeds that early settlers imported to North America.

The plant was called “Canada” thistle because early New England residents blamed its emergence on French traders from Canada. However, historians believe it appeared in the United States and Canada at approximately the same time. Its alternative name, creeping thistle, is more apt.

Canada thistle can grow up to two metres tall at maturity. It has purple flowers and spiny, glossy leaves arranged alternately along its stem and many branches.

This perennial plant reproduces primarily through horizontal roots or by seed. The former reproductive method is typically more successful and faster than the latter. Because of this, efforts to control Canada thistle populations focus primarily on horizontal roots.

Horizontal root shoots start emerging from the soil around the middle of April, and continue to do so during the summer. Seeds germinate beginning in late May through to autumn. A single plant can produce approximately 1,000 to 1,500 seeds, which are mainly dispersed by wind, but can also be spread by animals, equipment, clothing, water and vehicles.

Canada thistle is found in all Canadian provinces, as well as the Yukon and Northwest Territories. It typically grows in open areas, including pastures, cultivated fields, logged forests, riverbanks and roadsides. The plant does not tolerate very wet locations, and thrives on direct sunlight.

In addition to crowding out native plants, Canada thistle reduces the quality of rangelands and causes severe crop-yield losses, such as canola, barley and wheat. Canada thistle is officially classified as noxious (harmful to crops and/or natural areas) in Ontario, Alberta, BC, Saskatchewan, Manitoba and Quebec.

Because the species mainly spreads through its roots, control methods focus on clones. There are currently no appropriate control techniques for widespread eradication in natural areas, but there are methods to reduce plant numbers and keep new populations from becoming established.

Efforts to control Canada thistle populations may be more effective when the plant is facing environmental stresses, such as floods, droughts and cold temperatures. Cutting or using herbicide on shoots following severe winters may create enough stress to kill the plants.