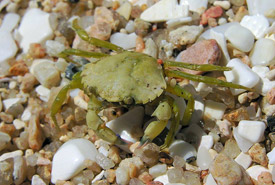 The European green crab is considered an aggressively invasive alien species in most of the regions it inhabits. It has spread across the globe by hitching rides on the hulls of ships and is now found in coastal waters along every continent except for Antarctica.

This species originated in the northeastern parts of the Atlantic Ocean, particularly the Baltic Sea. However, with the help of global fishing and shipping, it has quickly broadened its range and is now found in parts of Canada.

This species' most distinctive feature is the greenish tinge on its shell. Although it can range anywhere from grey to red, the species is primarily green in most regions. The shell has no bumps on it and extends all the way to the eyes, giving it an almost saucer-like shape. On average, the crab is 60 millimetres long and 90 millimetres wide.

In Atlantic Canada this species is a threat to vital eel-grass habitat that many waterfowl, seabirds and fish species rely on. By chopping off the shoots of eel-grass right at its base, the crab can easily destroy an entire area. In fact, this aggressive invader is on the One Hundred of the World's Worst Invasive Alien Species List.

European green crabs may now be found from South Carolina northwards. By 2007, this species had extended its range northwards to Placentia Bay, Newfoundland.

They were found along southern Vancouver Island in 1999, and its range continues to expand along the coast.