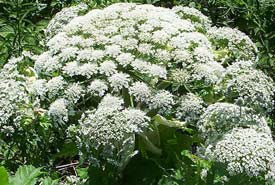 Giant hogweed is an extremely invasive species that originated from Asia and Eastern Europe. It is a perennial and a member of the carrot and parsley family. Giant hogweed can pose a serious health hazard for humans. If the plant’s watery, clear sap comes into contact with human skin and is then exposed to sunlight, the UV radiation can cause severe burning and weeping blisters.

The flowers are large umbrella-shaped cluster of small white flowers that closely resemble the wildflower Queen Anne’s Lace (also invasive in North America). The plant grows to impressive heights. Plants can grow as high as two to five and a half metres (15 to 18 feet). It has thick hollow stems and large lobed leaves. The stems are covered with reddish-purple flecks and stiff hairs filled with sap.

Seeds may take several years to grow and can live in the soil for up to 15 years. Giant hogweed flowers once in its lifetime, unless the flower clusters are damaged before opening. Once the plant produces seeds it dies. Each plant can produce up to 120,000 winged seeds (typically 50,000). Seeds can be spread up to 10 metres by the wind.

Giant hogweed has the potential to spread readily and grows along roadsides, ditches and streams. It invades old fields and open woodlands. In Canada it has been recorded in Atlantic Canada, Quebec, Ontario and British Columbia, and appears to be spreading.

Professional help is recommended. Use extreme caution to avoid skin contact with the plant. Protective equipment, including gloves, coveralls, goggles and face masks should be worn during treatment Small populations can be manually removed by digging up the plants (including the roots) while they are still small in the spring (May). Plant material should be left to dry and then left to rot in the sun in black garbage bags for a week or more prior to disposal in a landfill. Chemical control using herbicide in the spring or fall is also an effective tool for licensed pesticide exterminators. To eradicate the population, control treatment must be repeated over multiple years.