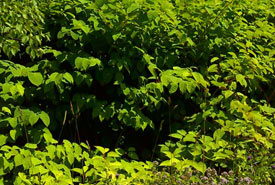 
Japanese knotweed is a perennial plant originally from eastern Asia. It was brought over to North America in the late 1800s for ornamental purposes and to reduce erosion and feed livestock.

Japanese knotweed can grow up to three metres high and has nodes on its stems that resemble bamboo. It has broad, teardrop-shaped leaves and often grows in dense clumps. New stems have a red to purplish colouration, eventually turning green with purple or reddish specks. In late July or August, small, greenish-white flowers emerge. The small white fruit it produces is spread by wind and water. The plant’s seeds are shiny, triangular and brown.

Japanese knotweed grows in riparian areas, wetlands, roadsides, ditches and along forest edges. This species had not been documented in the prairies until recently when it was recorded in Alberta. The plant is particularly problematic in Atlantic Canada, where it is taking over the edges of creeks and lakes.

Although Japanese knotweed grows best when exposed to full sunlight, it also grows in shaded riparian zones, which have moist soil. Some plants can grow along riverbanks, enabling root pieces to break off and travel downstream to establish new populations. This species’ rhizome (underground root system) can spread almost 10 metres away from the parent stem and grow through asphalt and concrete. This highly persistent species can withstand harsh floods and is able to recolonize areas.

Japanese knotweed is an aggressive invader that can form dense thickets and outcompete native vegetation. The plant’s root system can even create serious infrastructure problems, as it can grow through asphalt and concrete. It has been identified by the International Union for Conservation of Nature as one of the world’s 100 worst invading species.

To control Japanese knotweed populations, a combination of mechanical and chemical methods is most successful. Mechanical control techniques include cutting, mowing and pulling, all of which are effective long-term if done consistently. These tactics are especially useful for small, initial populations or areas where herbicides cannot be used.

Another method is tarping, which involves destroying the root system by covering a population of the plant with dark material to prevent sunlight from getting through. Chemical methods include injecting the species with salt water or herbicides.