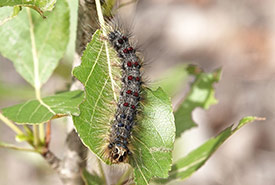 Each spongy moth caterpillar can eat one square metre of leaves in one season (Photo by Paul Prior, CC BY 4.0)

The spongy moth, formerly known as LDD moth, is native to Europe and an invasive species in eastern Canada. This species was brought to North America in 1869 by a French naturalist to establish the silk industry. 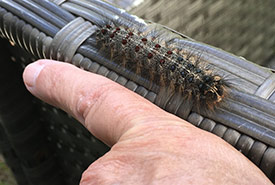 Fully grown spongy moth caterpillars are approximately 50 millimetres long, hairy, dark-coloured, with a row of five pairs of blue dots followed by a double row of six pairs of red dots on their back. Female moths are white with dark markings, with a wingspan of five centimetres, although they are flightless. Male moths are smaller (wingspan of 2.5 centimetres), brown and able to fly. 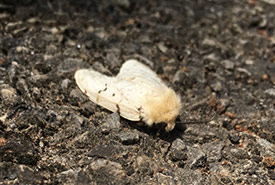 A female spongy moth on the ground (Photo by thatrobiam, CC BY-NC 4.0) 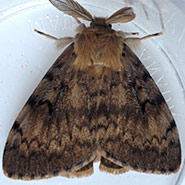 What is the spongy moth's ecological impact?

Spongy moth caterpillars have a voracious appetite. One single caterpillar can eat one square metre of leaves in one season. They feed on the leaves of over 400 plants and especially love deciduous trees, like sugar maples, oaks, elm and birch and some coniferous trees. This species goes through a population boom and crash cycle every 10 to 12 years. A viral disease as well as a fungal disease usually cause the population to crash after years of heavy outbreak. During outbreaks, the caterpillars can defoliate trees and even forests.

While hardwood trees may survive up to three years of severe defoliation, coniferous trees may not survive one bad infestation. This, in turn, affects forest health and wildlife that rely on the trees for food.

What you can do to stop this invasive species? 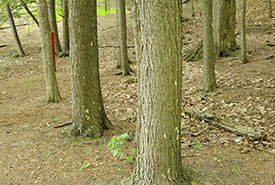 If you have infested plants and trees on your property, use the burlap band method to catch caterpillars that are seeking shelter from the mid-day sun. Scrape off any egg masses from tree trunks and soak them in a bucket of soapy water to kill the eggs, and dispose in the garbage. Report sightings of spongy moths at various life stages on EDDMapS (a tool for tracking invasive species) and also on iNaturalist.