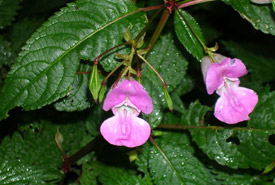 Himalayan balsam, commonly known as policeman’s helmet, is an invasive alien species threatening wetlands throughout much of the northern hemisphere. While native to the Himalayas, this plant spreads aggressively along riverbanks.

This purple-flowered giant (it can grow to be more than two metres tall) hasn't been too much of a problem in North America yet, but it's gaining hold in many of Ontario's local watersheds. The main threat posed by this plant is against native vegetation. On many occasions, native plants are out-competed and often suffocated.

The stem of this plant is usually purple with a reddish tinge. It is hollow and heavily branched. The leaves are egg-shaped with a serrated edge.

This plant is now present across much of the Northern Hemisphere and is found along rivers, trails and roadsides with moist to wet soils.

It is a Nature Conservancy of Canada (NCC) stewardship priority to remove these plants, generally by hand. Because of its shallow roots, policeman’s helmet is easily pulled from moist soil.

This is a simple task, unless you arrive a little late in the year. By mid-to-late August, these plants start to set seed and the seeds are held in explosive pods, much like touch-me-nots. One touch, or even a stiff gust of wind, will cause the pod to burst, dispersing seeds many feet away from the parent plant. This is a great way to spread seeds around the landscape, but it is difficult to handle when you are trying to control the plant.

The work to remove policeman’s helmet should be completed before the fruits begin to ripen, and it may be necessary to continue the process over several years.