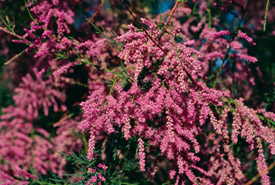 Salt-cedar (commonly known as “pink cascade” and tamarisk) has been identified as an invasive alien species by the Canadian Food Inspection Agency, named as one of The Nature Conservancy’s (U.S.) "dirty dozen" weeds and listed as one of the World Conservation Union’s 100 "worst invaders."

Salt-cedar has great reproductive capability. Its seeds are easily dispersed by wind and water, and severed stems root in moist soil.

An ornamental shrub native to Asia and Africa, salt-cedar has escaped from the garden into the wild. Although it is not naturalized in Canada, it is present in almost all American states, including North Dakota and Montana. Salt-cedar has adapted to tolerate a wide variety of environmental conditions and mainly occurs along disturbed streambanks, lakeshores, irrigation ditches and wetlands.

Salt-cedar is currently not on the Manitoba Noxious Weeds List and as a result can be purchased at nurseries and garden centres throughout Manitoba.

Salt-cedar has the potential to cause serious and irreversible damage to Canada's native ecosystems, economy and society. This invasive alien species is an aggressive plant that requires a massive amount of water to survive. It forms dense thickets that crowds out desirable native plant species, creates deposits of salt, reduces water tables, drains wetlands and clogs waterways with its extensive root system.

What is NCC doing to this species?

Invasive alien species such as salt-cedar threaten the ecological health of the Nature Conservancy of Canada's (NCC's) conservation lands. They do not respect jurisdictional borders and will establish themselves, regardless of property ownership.

In Manitoba, NCC is working in collaboration with the Invasive Species Council of Manitoba — a province-wide leadership body that has adopted a cooperative approach involving a number of key organizations and agencies to eradicate or limit further spread of invasive species.