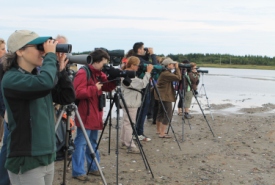 The Nature Conservancy of Canada (NCC) currently owns 272 hectares (671 acres) on Miscou Island. NCC has been protecting land on Miscou Island since 2006, in collaboration with local landowners.

Miscou Island at a glance

Miscou Island, named "m’susqu" by the Mi’Kmaq people and meaning "wet, boggy, low-lying terrain," is located off the northeastern tip of New Brunswick, between the Baie des Chaleurs and the Gulf of St. Lawrence.

Due to its geographic location, the island is an important migratory corridor for birds and the last land stop before reaching their southern overwintering grounds. All of Miscou Island is identified as an Important Bird Area, in large part due to the presence of nesting piping plovers on its beaches. Large numbers of shorebirds and waterfowl use the beaches, lagoons and large ponds on peat bogs of Miscou during the fall migration. Up to 1,000 northern gannets have been recorded feeding off the northern regions of Miscou Island.

Most of the island's interior is comprised of raised peat bogs and stunted forests. The Miscou Island coastal bog was designated by the province as an ecological reserve to ensure that it will remain unexploited.

NCC-protected lands on Miscou Island include sandy beaches, which provide nesting habitat for the nationally endangered piping plover. Also conserved by NCC are provincially significant wetlands, salt marsh, forests and tidal ponds. These areas are used as stopover sites for thousands of ducks and other migratory birds and provide homes for threatened species, such as Gulf of St. Lawrence aster and red knot sandpiper, Canada warbler and olive-sided flycatcher. A great blue heron colony occurs on one of NCC’s properties on the island and many provincially rare plants have been found on the NCC nature reserves.

NCC’s Lac Frye nature reserve is a great spot for birding. The provincial government maintains a viewing platform here. NCC has offered birding and identification workshops here to assist the public and volunteers in learning more about this natural environment.

We are continuing our work to protect ecologically significant land on Miscou Island. We are currently raising funds to purchase forest and salt marsh in the southeastern portion of Miscou.

We encourage everyone to get out in nature and enjoy some of the province's nicest coastal sites on Miscou Island.