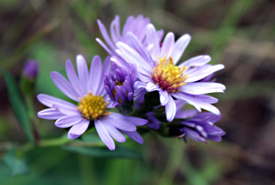 Located on the southwestern coast of Newfoundland, 10 kilometres west of Stephenville, Port au Port Peninsula’s limestone barrens are a unique natural area. This ecological hot spot is rich in biodiversity, and the habitat is critical for the survival of several rare and endangered plants native to only Newfoundland and Labrador.

The Nature Conservancy of Canada’s (NCC’s) stewardship team participated in the creation of a Limestone Barrens Species at Risk Recovery Plan, which was adopted and released by the province in 2022. Ten endangered plant species are identified in the recovery plan, including rare plants found in the limestone barrens of the Port au Port Peninsula and the Great Northern Peninsula.

Some of these plants exist nowhere else in the world and have adapted to grow in the limestone-based landscape here. The plants thrive in exposed areas, their dark leaves absorb the sun’s heat and they are subjected to high winds and low temperatures. The rocky barrens contain very little soil, and what is present is nutrient-poor. With a short growing season, plants tend to grow outward rather than upward, and they spread out, low to the ground, avoiding the impact of high winds. Rare and endangered plants included in the study include Long’s braya, Fernald’s braya, barrens willow, wooly arnica, Groscom’s arnica, Bodin’s milkvetch and oval-leaved creeping spearwort.

Plants specific to the southern limestone barrens where NCC has focused its efforts include:

A low-growing perennial that forms circular clumps. This boreal-arctic species is restricted to two occurrences on the Port au Port Peninsula.

A small herbaceous perennial. This calcium-loving plant grows on Table Mountain near the Port au Port Peninsula and is separated from its usual arctic-alpine habitat. It is listed as endangered under the provincial Endangered Species Act.

In addition to the recovery plan, the stewardship team has also led a mapping and classification project that focused on identifying land cover categories of the southern limestone barrens. NCC stewardship staff partnered with members of the Limestone Barrens Species at Risk Recovery Team and the provincial government to visit sites and acquire aerial imagery within the focus area. The resulting map identifies areas of limestone barren, heath, forest and wetland. The classification map is a starting point to show changes over time and to provide a benchmark for addressing threats to the southern limestone barrens. It will also help to identify and classify critical habitat for rare and at-risk species. The graphic map will increase identification accuracy to help guide our conservation efforts going forward. This project began in 2020 and was completed in 2022.

The recovery plan provides a detailed roadmap to species recovery and protective management actions that will help at-risk plants through ongoing research, monitoring, restoration, community education and outreach. Together, the recovery plan and classification map will help identify key areas to protect and provide a survival plan for the plant species at risk.