Salmonier River on the Avalon Peninsula (Photo by M. Dembeck) 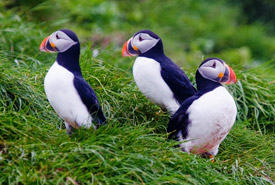 The Avalon Peninsula Natural Area is an NCC priority in Newfoundland and Labrador because of its globally significant wildlife and habitats. Almost completely bordered by the Atlantic Ocean, this Natural Area has over 2,500 kilometres of dramatic coastline, much of which rises abruptly from the sea and is indented with numerous bays and inlets. Along this coastline are some of the greatest seabird hotspots in the world, with thousands of seabirds nesting in the area annually.

The forest habitat in the Natural Area represents the smallest ecoregion in Newfoundland and Labrador. A combination of factors, such as geology, topography and climate, make the forest environment a great spot for a high diversity of lichens, some of which are unique on a global scale. The natural heathlands of the Avalon Peninsula are an iconic landscape and help support the Avalon herd of woodland caribou, the most southerly herd in the world. Scattered across the landscape is large diversity of wetland types, including bogs, fens and marshes. There are also many large rivers and ponds in the Natural Area, which provide resources for freshwater fish, spawning fish and mammals. 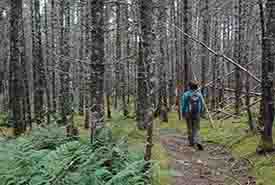 Hiking through the Avalon forest (Photo by T. Nickerson)