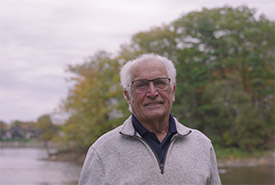 This is the story of a tiny island in the Rivière des Prairies, surrounded by gigantic neighbours: Île Jésus (Laval), Île Bizard and the island of Montreal. Despite being three hectares, barely bigger than seven soccer fields, its rare beauty has always attracted attention. Over the years, its neighbours have undergone considerable development, but Thor Vikström, owner of the Vikström Island natural sanctuary, wanted to keep the island’s natural beauty intact.

Originally from Sweden and fascinated by Canada and what it had to offer, Thor fell in love with the island, which he could see from his house and which he considered invaluable.

A literal island of nature in the heart of a vast metropolitan area, the island is a true haven for wildlife. Map turtles, a vulnerable species, use its banks to bask in the sun. In the spring, ducks — including the wood duck, Thor’s favourite — can be heard calling after their ducklings. The island is also home to shagbark hickory, an at-risk tree species whose frayed bark looks like paper.

With all this biodiversity concentrated on a very small island, this natural jewel within a highly urbanized environment has many qualities.

The beauty and natural wealth of Thor’s island has remained undiminished over time. His care for the island over the past half century has conserved all of its biodiversity. Concerned about the island’s future, he has sought ways to ensure that its natural environment would remain protected for generations to come.

“This island is more valuable than millions of dollars, because its nature is irreplaceable. That is why I have always refused to sell it. Now I know that it will be protected forever,” says Thor, wiping away a tear.

It was with a full heart and a mind at peace that he entrusted Île Vikström to the Nature Conservancy of Canada. This type of land donation helps protect habitat and the species that live there, and generous donations such as these from landowners allow us to continue our mission, one hectare at a time.

Healthy natural environments are a gift for future generations. And Thor’s act of generosity will likewise serve as a model for others.

The Vikström Island natural sanctuary, with its plants, wildlife and especially its ducks, changed Thor’s life. In return, he has altered the destiny of this small piece of land in the middle of the water by ensuring it remains true to its own nature for the long term.

This project was made possible thanks to several partners. The Nature Conservancy of Canada (NCC) would like to thank Thor Vikström, former owner of Île Vikström, for his great generosity. Conservation of this property has also received financial support from the Government of Quebec, through its Projet de partenariat pour les milieux naturels, and from the U.S. Fish and Wildlife Service, under the North American Wetlands Conservation Act. Protection, restoration and awareness initiatives to enhance the St. Lawrence River ecosystem and, in particular, to conserve turtle habitats, such as those of the map turtle, will be carried out through the Community Interaction Program. NCC also thanks the Laurentian Bank for its continued support and Age of Union for the protection of St. Lawrence River islands.