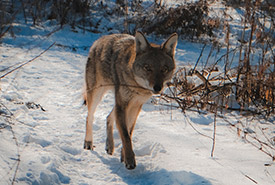 In spring, nature awakens. Every day, it looks different; a new flower has bloomed, a new bird sings, new mysterious eggs appear in a stream. It's nice to head outside and enjoy the fresh air and the sun peeking through the buildings. Whether you’re in the country or in the city, spring is an ideal time to observe wildlife: the vegetation isn’t too dense, food is more abundant, and several species are returning from their migration or waking up from a long hibernation. But some encounters can be unexpected!

The coyote, a lesser-known cousin of the domestic dog, is sometimes misunderstood or even feared. This species is known to roam the city, typically hunting during dawn or dusk. But don't worry; it’s not interested in yo.! In fact, like snakes and birds of prey, this friendly predator does us a great service by feeding on small pests, such as mice, field mice or groundhogs. Coyotes play an important role in controlling these small animals in cities. In springtime, they find a den, raise their young and stock up on food, which is often scarce during the winter. Coyotes are opportunistic, which means they eat what they find: small and medium rodents, dead animal carcasses, cat food left outside, garbage cans... In other words: they always find something to eat, whether out in the field or in the middle of town.

But what should you do if you see this potentially intimidating animal?

Remember the last squirrel you saw go by? Well, just do the same thing if you spot a coyote! Don't disturb it, watch it from a distance and enjoy the show. Coyotes will likely not approach humans, but if you frighten it or try to get close to it, it may show its teeth. It is important to remember that despite its resemblance to our beloved house pets, it is still a wild animal and, just like a trapped squirrel, it can become aggressive. After all, it is also a cousin of the wolf, and who would ever think of cornering a wolf in an alley?

I've never seen one; there's certainly none in my area

Think again! These animals are masters in the art of finding shelter that is well hidden from the eyes of humans, but they are in fact present throughout the southern part of Quebec, up to Chibougamau. Yes, even in the heart of Montreal there are plenty of coyotes! If you haven’t seen one, it might be that you haven’t stopped to observe the wildlife between work and home. As far as coyotes are concerned, that's a good thing because it means no one bothers them! You might have an easier time hearing them than seeing them: at night, they sometimes make sounds that sound like plaintive barking. After all, they are related to wolves.