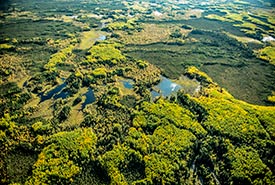 The Nature Conservancy of Canada (NCC) is proud to celebrate the protection of 3,300 square kilometres of boreal forest in northeast Alberta. When added to neighbouring conserved lands, the area now measures 67,000 square kilometres (6.7 million hectares). It is the world’s largest contiguous protected boreal forest, home to many species of conservation concern.

This groundbreaking conservation project could only be achieved through collaboration. NCC facilitated agreements between the Tallcree Tribal Government and the Government of Alberta to retire timber quotas along the Birch River. Contributions from Syncrude Canada Ltd., the Government of Canada’s Natural Areas Conservation Program, The Schad Foundation and others made the project possible. This collaboration cleared the way for the creation of the new Birch River Wildland Provincial Park.

Nearly one-third of the world’s boreal zone lies within Canada’s borders. Its forest teems with life.

Birch River Wildland Provincial Park is a haven for the trees and plants that clean our air and water. This area is also a nursery for many migratory bird species. Three species listed under the Species at Risk Act can be found here: peregrine falcon (special concern), wood bison (threatened) and woodland caribou (threatened).

Large-scale conservation such as this is a testament that Canada can do more — and faster — when partners come together. The Birch River Wildland Provincial Park directly contributes to achieving Canada Target 1; the nation’s pledge to conserve 17 per cent of our lands and inland waters by 2020.