The Blackstone River valley, YT is home to rich biodiversity of flora and fauna. (Photo by Sonny Parker) 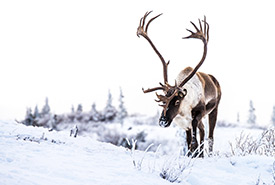 The area known as Van Tat is in the Traditional Territory of the Vuntut Gwitchin, the “people of the lakes.” The area is significant for local people and wildlife. It also supports expansive, internationally significant lakes and wetlands, which are important for migrating and nesting waterfowl, muskrat, moose, migrating Porcupine caribou herd and fish.

The Gwichin have travelled to Van Tat for hundreds of years and continue to use it year-round for trapping, harvesting and recreation. They also use the area for cultural, health and economic purposes, including collecting oral history, research and education. This history of use is evident in archaeological sites, such as caribou fences, that were reported to have been used to harvest caribou until 1920. Internationally significant palaeontological discoveries along the Old Crow River, which flows through Van Tat, include bones from Ice Age animals, like the giant beaver and scimitar cat. 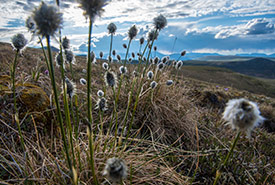 Cottongrass is part of the sedge family and an important dietary component of caribou moms as they raise their young ones. (Photo by Sonny Parker)

In the 1990s, the Nature Conservancy of Canada (NCC) collaborated with the Vuntut Gwitchin Government and the Department of Indigenous and Northern Affairs to negotiate the sale and donation of more than 4,000 square kilometres of mineral permits from various energy companies within this important area.

NCC’s support included the acquisition and permanent withdrawal of industrial resource development rights. These rights were then donated to the Governments of Canada and the Yukon Territory. 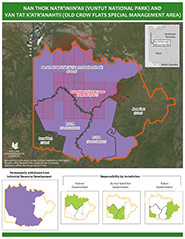 To learn more about this unique area and its management, see the following links: