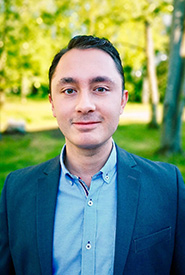 Executive Manager & Corporate Secretary, Office of the President and CEO

Michael Paskewitz is the executive manager and corporate secretary in the Office of the President and CEO at the Nature Conservancy of Canada (NCC). He brings 10+ years experience in non-profit management, public affairs, governance and communications, and a passion to make Canada a world leader in nature conservation.

He has a BA in political studies and media from Queen’s University and is completing the master of Philanthropy and Non-Profit Leadership program at Carleton University. Prior to his time at NCC, he worked to enhance the public affairs and organizational capacity of international non-profits, including the Canadian Executive Service Organization and as a board member with the Ontario Council for International Cooperation. This also provided him the opportunity to work internationally, including in Guyana and the Philippines. He has also spent time in Ottawa working as a political staffer in the Leader’s Office of a federal political party. His public affairs work has led to positive public policy outcomes for environmental and international development efforts.

Michael developed his passion for nature during his upbringing in Hong Kong and Manitoba, where he regularly hiked Hong Kong’s many mountains and spent summers by Lake Winnipeg.