www.natureconservancy.ca > Home > Who We Are > Publications > Magazine > Fall 2022

Toward a thriving world 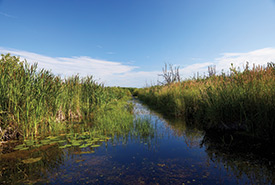 Cattails sway in the gentle morning breeze. Three beavers frolic in the shallow water, shiny backs arching briefly in the sun. A green frog calls. And then, the urgent trill of the swamp sparrow: “chee-chee-chee-chee.”

Always alert for the flick of a wing, Mark Stabb, central Ontario program director for the Nature Conservancy of Canada (NCC), pulls up his binoculars and peers into the trees. It’s another species: a cedar waxwing. This spot, the 1,340-hectare Cavan Swamp Wildlife Area near Peterborough, which NCC helped conserve, is a well-known refuge for birds. From the roadside, he also spots a rose-breasted grosbeak, grackles, mourning doves, goldfinches — and that’s only the beginning. We stand open-mouthed as two great blue herons — elegant and serene — take to the skies.

“NCC helped put this together decades ago,” he says, cradling the binoculars as he drinks in the beauty of the place. “And now it’s  all out there and doing what it’s intended to do.”

The Cavan Swamp is more than just another vast protected area that NCC had a hand in creating. It was the launching pad for NCC’s work in Canada, the first big purchase. Today, as NCC turns 60, Cavan Swamp is a symbol not only of how far the organization has come in those six decades, but also of the next challenges it is eager to tackle. 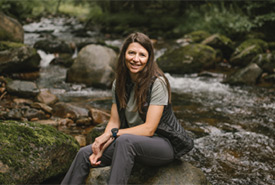 “I think at 60, we have the great maturity of knowing who we are and how we can use that expertise to help unlock solutions for conservation,” says Catherine Grenier, NCC’s president and chief executive officer. “It’s such a critical time for nature. There’s never been a more important time in history. And NCC has built this unique skill set that it can now use to make a big difference.”

The overall plan? To use NCC’s expertise and relationships to scale conservation up dramatically, doubling the impact the organization had in its first 60 years in just the next eight. And then, keep going. “Ultimately, our vision is to build a thriving world with nature,” Grenier says.

NCC’s tool kit has grown along with the organization. In 1962, when NCC was founded on the private land trust model of other countries, Canada had few policies preventing the bulldozing of wetlands, a critical habitat for migrating birds. In those first years, the fledgling NCC raced to raise enough money to help buy the Rattray Marsh, a key wetland on the lakeshore between Toronto and Burlington that was up for development.

But when the deal fell through, NCC turned to an ambitious new tactic in its efforts to take direct private action, becoming a financing partner with conservation authorities, governments and other agencies to help buy these ecologically important lands through private funds. The Cavan Swamp, part of which NCC helped secure in 1968 (it is managed by the Otonabee Region Conservation  Authority), was the test case.

A History of the Nature Conservancy of Canada, by the late Dr. Bill Freedman, includes a reflection by Charles Sauriol, one of NCC’s first staff, on NCC’s growing role as a conservation partner: “This is why the Conservancy had been born. Its role was that of a catalyst, a facilitator; being a purveyor of funds and matching grants was its raison d’être” (Freedman, 48-49).

Today, NCC is Canada’s largest not-forprofit land conservation organization, and it has helped save more than 15 million hectares, some of which it manages itself. By 1971, NCC had expanded its collaborative impulse even further, crafting a 10-year partnership with the Ontario Ministry of Natural Resources (as it was then called) and the Richard Ivey Foundation (now the Ivey Foundation) to conserve woodlands along the Niagara Escarpment. The project took off when the late Richard and Beryl Ivey, both passionate about the environment, introduced their neighbour to NCC. He happened to be John Robarts, the then premier of Ontario. 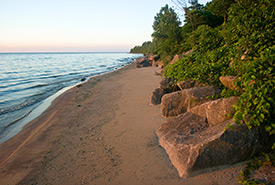 Pelee Island, ON, one of the properties secured thanks to the Ivey Foundation. (Photo by Sam Brinker)

The Iveys suggested a novel matching recipe for escarpment purchases: one dollar of private money for every two dollars from the province, with ownership of the properties transferred to local conservation authorities. The plan kick-started the saving of the escarpment, which is now part of a UNESCO World Biosphere Reserve, and set a pattern for future projects.

Jennifer Ivey Bannock, daughter of Richard and Beryl Ivey, continued the family passion for conservation through her work on NCC’s board.

“My parents were passionate about the environment,” she says. “I  spent many happy years on the board of NCC, and thanks to them, came to appreciate Canada’s wide variety of landscapes. With our natural world under so much pressure these days, NCC’s work to conserve Canada’s remaining natural treasures seems even more critical.”

Other nimble new joint efforts followed the escarpment project. Larry Simpson, now senior advisor of strategic philanthropy and conservation for NCC in Alberta, joined  the organization in 1990, “the first employee west of Toronto,” he says, chuckling. It was the start of a decade-long expansion across the nation, which, in turn, set the stage for an outpouring of new possibilities identified  through local connections.

“What we’re trying to do is help people be part of a movement to create the kind of country that we want our kids to be able to thrive in,” Simpson says. “It’s a wonderfully powerful mission.”

But Simpson quickly realized that Canada lacked the tax mechanisms to allow citizens and corporations to donate land at a fair value or to create conservation agreements restricting certain uses on the land in the future. With a small gift from Neil Harvie, the rancher who owned Alberta’s fabled Glenbow Ranch, Simpson visited directors of wildlife in several provinces to sound them out about new conservation-friendly tax rules.

The result was Canada’s Ecological Gifts Program, begun in 1995; a muscular collaboration among dozens of partners across federal departments and other layers of government, plus non-governmental organizations. So far, more than 200,000 ecologically sensitive hectares valued at nearly $1 billion have become part of the program. And it’s growing: more landowners participate each year. Simpson often reflects on the inspiration NCC has drawn from its donors to help propel its work.

“Donors like The Weston Family Foundation and John and Barbara Poole, whose donations in the late 90s first made our work in the Waterton Park Front in Alberta possible, helped NCC realize that there were some significant supporters who wanted us to take on bigger and more inspiring projects; and we did,” he notes.

“I have always viewed every place we conserve as being a gift to future generations, to people I don’t know and will never meet. Every single time, it’s a warm glow.” As NCC evolves, so does the list of innovations, explains Kamal Rajani, NCC’s chief financial officer. NCC has made a practice of  working with partners to buy development rights from resource companies on large tracts of land, saving important habitat from being significantly altered.

This is an excerpt of a story that first appeared in the fall 2022 issue of the Nature Conservancy of Canada Magazine. Donors who contribute at least $25 or more per year will receive the magazine. Click here to donate today and start receiving the magazine.