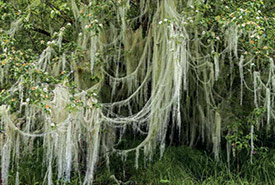 I often go out for an “aimless wander,” especially in the woods surrounding my home.

It is an opportunity for me to leave my preoccupied mind and open my awareness to the surrounding environment. Seeing, listening, smelling, touching...even tasting, if something edible is on hand. No destination, no plan, no formal hike.

It is with such a mindset that I discover details; the small, the overlooked. I’m thrilled by the tiny pockets of the “universe” that I find. Often this means lichens and mosses; things you need to stop and really look at to appreciate. Intricacies appear. It takes time to observe. To really look, to really see. Lichens are all around but often unnoticed. They can be found worldwide, from ocean coasts to mountain peaks, from the Arctic to Antarctica.

They grow on almost any surface, in many diverse (and sometimes weird) forms. Rocks, soil and other plants are all homes for lichens. In areas freshly denuded of vegetation, lichens are typically the first organisms to gain a foothold.

They are the foundation of more complex ecosystems. Lichens’ abilities to withstand extremes of temperature and drought also amaze me. However, many are sensitive to air pollutants. Their absence can be an indication of poor air quality. Depending on where you are, lichens may be both discrete and obvious. Some are showy, others require a magnifying glass or loupe to reveal an amazing world of details. A favourite of mine is called old man’s beard. Its shaggy, stringy strands remind me of pale greenish-grey tinsel on a Christmas tree.

Sadly, despite their ubiquitous and generally hardy nature, some lichens are designated as species at risk. For example, boreal felt lichen and vole ears lichen are endangered. Their decline is linked in part to prevailing winds that bring pollution from central Canada and the eastern U.S., which falls in Nova Scotia, my home province, as acid rain. Pollution isn’t the only threat; they are also threatened by land use changes and climate change.

Time spent in nature is time well spent. Get yourself out there.

Pause. Close your eyes. Listen. Smell. Feel. Breathe. Let go of the thinking that preoccupies you. Open your eyes. Can you find a lichen?

This story originally appeared in the spring 2022 issue of the Nature Conservancy of Canada Magazine. To learn more about how you can receive the magazine, click here.