www.natureconservancy.ca > Home > Who We Are > Publications > Magazine > Summer 2016 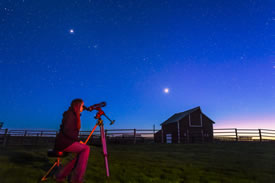 Chris Beckett knows good stargazing when he sees it. The Regina-based astronomy guru has served as the National Observing Chair of the Royal Astronomical Society of Canada (RASC) and toured cross-country, speaking to audiences about the crème-de-la-crème of cosmic sights.

On a sunny August afternoon, he’s driving across Saskatchewan’s Highway 13 through rolling grasslands along the U.S. border. A couple of hours southwest of Swift Current, the car climbs onto a plateau to reveal a ghostly, jagged horizon of distant mountains in Montana before descending into a shallow bowl a dozen kilometres wide. “This couldn’t be more perfect,” Chris remarks once he’s stopped in the middle of the bowl. “It’s like this place was designed for astronomy.” He’s arrived at the visitor’s centre for the Old Man on His Back Prairie and Heritage Conservation Area (OMB), a 5,297-hectare (13,088-acre) tract of intact grassland, home to at-risk species such as ferruginous hawk and the once-extirpated swift fox. It’s also one of the flagship projects in Saskatchewan for the Nature Conservancy of Canada (NCC). 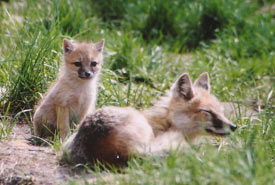 Thanks to a collaboration between the ranch’s previous owners, Peter and Sharon Butala, and NCC, this prime example of semi-arid mixed grass prairie is sheltered from future land development. Now astronomy enthusiasts such as Beckett are realizing that conserving areas like OMB not only protects the flora and fauna on the ground, but the evening skies above. In turn, new research is finding that dark skies themselves actually play a role in ensuring the well-being of species at night.

Over the last few decades, light pollution — the artificial brightening of the night sky by streetlights, industrial and vehicle lighting — has ballooned so out of control that most children born today will never see a sky dark enough to reveal the Milky Way. More than just wrecking our view of space, light pollution has been proven to interfere with the natural rhythms of everything from insects to humans.

“Light pollution from tall office buildings and communications towers can interfere with bird navigation, resulting in bird strikes,” says NCC Senior Director of Conservation Program Development and Weston Conservation Scientist, Dan Kraus, who notes that many birds migrate at night and use celestial cues from the stars to help navigate between breeding and wintering grounds. “Many bird species are declining because of both habitat loss and higher mortality during migration because of the obstacles we’re creating,” he says.

In southern Ontario, where bird migration is increasingly difficult due to light pollution, NCC has restored 600 hectares (1,483 acres) in areas that serve as critical migratory stopovers for hundreds of bird species, in places such as the Western Lake Erie Islands (including Pelee Island) as well as the Southern Norfolk Sand Plain — two biodiversity hotspots along the north shore of Lake Erie.

For some species, light pollution interrupts processes such as sleep, feeding, migration and reproductive habits. For example, the American burying beetle is gone from Canada and has disappeared from a huge part of its former range. One of the theories behind the beetle’s disappearance is that artificial lighting has negatively impacted its life cycle. 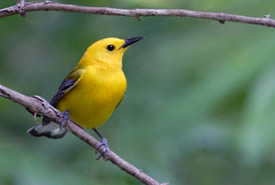 For other species, such as salamanders, “some laboratory studies have found that artificial light may reduce active foraging time in adults and increase the time salamanders spent searching for and hiding under shelter,” says Jennifer McCarter, an Ontario Region reptile and amphibian conservation biologist with NCC. “If there’s artificial light, it could also help predators hunting salamanders at night,” she adds.

Artificial illumination also impairs the songs that precede breeding in frogs, draws newly hatched turtles away from the moonlit ocean and causes huge populations of moths to fly into lights, depleting food sources for bats and birds.

“Fortunately,” notes McCarter, “the lands that NCC protects are located in areas of high biodiversity — areas that are typically already more rural and remote and thus more dark than ones closer to more urban areas.” In that respect, the confluence of wildlife conservation and dark sky preservation seems to be a match made in the heavens.

Dancing in the dark

Back at OMB, this double-benefit hasn’t gone unnoticed: in 2015, the RASC awarded OMB with its nocturnal preserve designation, recognizing the ranch’s already dark skies. This year also OMB celebrates its 20th anniversary as a conservation site.

“Because of the ubiquitous nature of outdoor illumination, people from the city often come out to the country and start putting up their yard lighting,” says RASC Light Pollution Abatement Chair, Robert Dick. “By setting up dark sky preserves in national parks and conservation areas, we can protect some of these near-pristine environments so they maintain a balanced ecosystem.” 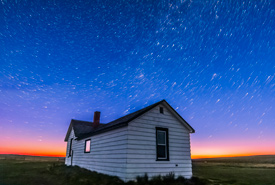 As darkness descends on the prairies, every wisp, tendril and dust lane of the Milky Way blends in to the canopy of nearly innumerable stars across the rest of the sky. The grass here has a natural baffling effect on any remaining stray light, allowing Beckett to see stars right down to the horizon, where the delicate purple-green columns of an aurora are beginning to dance in the north.

Front row to the cosmos

Across the country in the foothills of the Alberta Rockies, Waterton Lakes National Park is home to some of the most iconic mountainscapes in North America, and under consideration to become an RASC Dark Sky Preserve. The rolling ranchland here just outside the park is one of NCC’s most critical projects in the province.

“Fragmentation due to human development is the biggest threat to the natural landscape here,” says Anne Stevick, NCC’s natural area manager for the Waterton east region. The area is prime habitat for moose, elk, white-tailed deer, cougars, wolves, grizzly and black bears. In addition to being hard on smaller species, light pollution is thought to affect top predators through reducing diversity in an area, disrupting the food chain all the way to the top.

Thanks to a generous donation from The W. Garfield Weston Foundation, 12,950 hectares (32,000 acres) that might have otherwise been sold to developers here has been conserved. In many cases, the sales and agreements with local ranchers have even allowed farming and ranching here to continue, while preventing the addition of roads, vehicles and lights that would disturb natural rhythms of wildlife

“This is such a great place,” says Stevick. “By keeping the land from development, we have a way for the public to appreciate these spaces without disturbing the species in them.”For people able to get front-row seats to the universe in such places, it’s a once-in-a-lifetime opportunity to see the cosmos as nature intended. For the plants and animals here, it’s a place to live out their lives in an environment that’s truly natural, day and night.

This story was written by Peter McMahon and originally appeared in the Summer 2016 issue of the Nature Conservancy of Canada Magazine. To learn more about how you can receive the magazine, click here.