www.natureconservancy.ca > Home > Who We Are > Publications > Magazine > Summer 2019 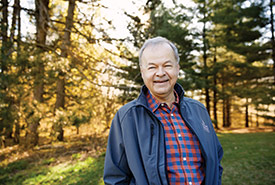 After 20 years of volunteering with NCC, Bruce MacLellan, the chair of the national board, is just as excited about conservation and NCC’s critical work as when he first started

About 70 kilometres northeast of Toronto, the unique geologic feature known as the Oak Ridges Moraine marks the great divide between the Lake Ontario and Lake Huron basins. It’s in these headwaters that many rivers are born.

Some trickle north, others south. A few quiet creeks run through the Nature Conservancy of Canada (NCC) properties in the Happy Valley Forest, before joining the Humber River. Some wind their way through an increasingly urban landscape, into ravines that eventually flow into Lake Ontario.

A number of those ravines snake by Toronto’s busiest intersections and towering office buildings and condominiums. And while business entrepreneur, marketer and philanthropist Bruce MacLellan’s office sits on the ninth floor of one of those buildings, Toronto’s ravines are never far from his mind. When he was growing up in central Toronto, they were places of countless hours of exploration and adventure, and the source for his connection to nature.

“My buddies and I used to get on our bikes and spend hours exploring in the ravines,” MacLellan recalls. “Toronto’s ravines imprinted nature on me and my values. With their big, old white pines and maples, they can be serene and magical places.”

From those childhood adventures began a lifelong commitment to the protection and enjoyment of Canada’s natural places.

“Conservation and preservation of the natural and cultural history of an area are two causes that speak to me,” reflects MacLellan, who published two books about the history of the Lake of Bays, where his family cottage is located, about three hours north of Toronto. Proceeds from the books were donated to the Lake of Bays Heritage Foundation.

In his professional life, MacLellan is the founding president and CEO of Proof Inc., a marketing and communications group with 175 people. Outside business hours, MacLellan gives his time to non-profit organizations that reflect his personal values. MacLellan has volunteered at all levels of natural habitat protection. He has chaired the Lake of Bays Heritage Foundation, served on NCC’s Ontario Board and was awarded the Vision Award in 2016 by the Ontario Land Trust Alliance for his work in conservation.

Reflecting on his two years as the chair, MacLellan is proud of many accomplishments. Chief among them is his role in encouraging NCC to continue to be “best in class.”

“A priority in my role as board chair has been to encourage the full potential of NCC’s brand to connect with a diverse Canada. We should be an iconic Canadian charity admired by everyone,” says MacLellan.

And while his involvement with NCC now spans close to two decades, his passion for NCC’s cause hasn’t waned. “One of the great things is, even after 20 years, I’m still as enthusiastic as when I first started, and my awe for what we do keeps growing. I’m experiencing volunteer enthusiasm, not fatigue.”

MacLellan’s commitment to NCC’s mission goes beyond the boardroom walls. In fact, if you were to trace the Humber River back up to the Happy Valley Forest, you’d find a special place that Bruce and his wife, Karen Girling, have helped conserve, through a gift to the Landmark Campaign. It was important to them to protect this place at the headwaters of many of Toronto’s waterways, near where they live and raised their children.

The mature oak, maple and hemlock of NCC’s Happy Valley Forest will become an old-growth forest, and provide a glimpse of the forests that once characterized these hills. MacLellan likes to think of those who will visit it in the future. “One hundred years from now, people will wonder who had the foresight to protect a place like this,” he reflects.

It seems conservation runs in the family. Both of Bruce and Karen’s daughters have a strong connection to nature, which they learned from their parents. And when Karen’s late mother, Marianne Girling, discovered Bruce’s involvement with NCC, she amended her will to leave a bequest to the organization. Bruce and Karen are now working with NCC staff in Ontario to create the Marianne Girling Nature Reserve in NCC’s Essex Forests and Wetlands Natural Area, where Marianne grew up and raised a family.

A second portion of the MacLellans’ campaign gift to NCC was directed to NCC staff training. “As a business owner of a marketing and communications company, I believe it’s important to invest in people. When they grow, the company succeeds. As a charity, it’s often hard to raise funds for training,” explains MacLellan.

At Proof, MacLellan’s commitment to NCC’s mandate has been well received by the team, some of whom have now become NCC donors. Each year, the carbon-neutral company purchases carbon offsets from NCC’s Darkwoods Forest project in British Columbia. This year, Proof will be marking its 25-year anniversary. To celebrate it, the company is sponsoring the planting of 325 trees, one for every employee in Proof’s history, on one of NCC’s Ontario properties. As well, a visit by current staff for a hike on an NCC property in Newfoundland and Labrador is planned for October.

Above all, MacLellan’s personal and professional ethos represent his pride in Canada’s culture and landscapes.

“I consider myself a very patriotic Canadian, and I’ve been blessed to live in this country and benefit from its natural resources. We have a huge stewardship responsibility to protect our country’s great qualities for future generations.”

As MacLellan wraps up his term as board chair with NCC, he knows his connections to the organization will continue.

“In five years, I’ll still be an NCC volunteer and donor. NCC will be a more diverse organization, working on larger-scale conservation, but also still doing what it does.

This story first appeared in the summer 2019 issue of the Nature Conservancy of Canada Magazine. Donors who contribute at least $25 or more per year will receive four issues of the magazine.