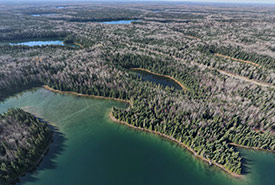 Faced with the urgent crises of rapid biodiversity loss and climate change, we must expand the pace, scale and scope of conservation

Put a map of Ontario on the wall, throw a dart at its geographical centre, and if your aim is true, that dart will hit smack dab in the boreal forest, somewhere near Hornepayne, a forestry town 500 kilometres northeast of Thunder Bay.

For two years, that part of the map has been a special focus for Kristyn Ferguson, the Nature Conservancy of Canada’s (NCC’s) program director for large landscapes in Ontario. Specifically, a 1,450-square-kilometre (145,000-hectare) area to the west and south of the community of Hearst, about 900 kilometres north of Toronto. The lands here are rich in boreal forest habitat, pristine lakes and rivers, and carbon-storing peatlands.

In April, on Earth Day, NCC unveiled a fundraising campaign to complete the conservation of these lands, covering an area more than twice the size of the city of Toronto. When complete, the project will be the largest single private conservation project ever undertaken in Canada, dubbed the Boreal Wildlands. “The first time I had a chance to visit the property was in late September of 2021,” says Ferguson. “It was peak fall, where all the poplar and birch leaves turn yellow against the dark conifers. From any bit of height, looking out at the forest, it just goes on forever. The lakes look glacial because of their bright  greenish colour. This place is mesmerizing.”

Boreal Wildlands’ significance is both tangible and symbolic. The property, originally held by Domtar, with whom NCC negotiated an option to purchase the site, has tremendous  conservation value. It is home to threatened woodland caribou, other large mammals like black bear, lynx, wolf and moose, and provides nesting, breeding and migratory stopover habitat for a multitude of birds.

At the same time, the project epitomizes how NCC, as Canada’s leading private conservation organization, is responding to the crises of rapid biodiversity loss and climate change by expanding the pace, scale and scope of its work — adding a focus on larger conservation projects in all regions that builds on its long history of protecting crucial habitat in southern Canada.

This focus, a cornerstone of NCC’s new roadmap for the next eight years, will see NCC protect more land, faster, either through traditional fee simple acquisition, as with Boreal Wildlands, or by lending its expertise — in securing private financing or acquiring resource development rights, say — to help projects led by governments, Indigenous communities or other partners.

The goal: to double NCC’s impact by 2030, conserving an additional one million hectares and delivering $1.5 billion of new conservation outcomes. In the process, NCC will help Canada achieve its pledge, as a member of the international High Ambition Coalition for Nature and People, to protect 30 per cent of this country’s lands and waters by 2030.

“Our new strategic plan lays out our toolkit and our values, and a recognition that with climate change and biodiversity loss, we have a big part to play,” says Nancy Newhouse, NCC’s regional vice-president in British Columbia.

It’s an approach endorsed by Mike Wong, North American regional vice-chair of the International Union for Conservation of Nature’s World Commission on Protected Areas. “Protected areas are one of the best conservation tools in the world,” says Wong, who is based in Gatineau, Quebec. “When you have large intact areas that are well-managed, you conserve both the diversity as well as the carbon that is stored in that protected ecosystem.”

This excerpt originally appeared in the summer 2022 issue of the Nature Conservancy of Canada Magazine.