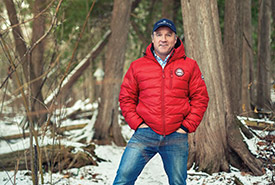 Canada is home to many incredible landscapes, from the  towering Rocky Mountains, to vast forests, lush wetlands and salty coastlines. When Geoff Green thinks of Canada, he takes a coastal approach to appreciating this country, taking the words “True North, strong and free” quite literally.

“We have the longest coastline in the world and there is incredible beauty every step of the way,” says Green when asked about his favourite place in Canada. “On the Atlantic coast, there’s the North Arm Fjord in the Torngat Mountains National Park, Nunatsiavut*. This is truly one of the most spectacular and spiritual places on Earth. In the Arctic, there’s Tallurutiup Imanga (Lancaster Sound) — home to Inuit, polar bears, narwhals, seabirds, mountains, glaciers and sea ice, and soon to be Canada’s newest National Marine Conservation Area. Of course, on the Pacific coast of Canada, there is the one and only Gwaii Haanas!”

Green is no stranger to special landscapes. As the founder and executive director of Students on Ice (SOI), an organization focused on teaching youth about the polar regions, he has visited some of the world’s most untouched and unique natural areas. Since 1994, Green has made more than 120 expeditions to the Arctic and Antarctic. “Students on Ice was born from the idea that we could use the polar regions as the greatest classrooms on Earth,” says Green. “The polar regions are the cornerstones of how our global oceans function. They’re are also windows on the world and symbols of peace, understanding and conservation.”

Since its start in 1999, SOI has set off on more than 40 expeditions. Typically, each trip consists of 100–200 students and teachers, depending on the ship, with 85 per cent of students receiving a scholarship that covers the cost of the expedition. In anticipation of Canada’s 150th anniversary of Confederation, Green dreamt of an epic trip that would connect even more Canadians to even more landscapes. “One afternoon we sketched out the plan on the back of a napkin, to sail from Toronto, up the East Coast, across the Arctic and down to the West Coast,” recalls Green. “What better way could there be to connect Canada, to tell stories and to showcase all three of Canada’s coastlines? It seemed like a no-brainer.”

Dubbed Canada C3, the trip was a 150-day, six-month sailing journey organized by SOI, starting in Toronto, Ontario, and ending in Victoria, British Columbia, via the Northwest Passage. The purpose of the expedition was to connect Canadians from diverse backgrounds, such as musicians, artists, Indigenous leaders, youth, scientists and conservation leaders (including the Nature Conservancy of Canada’s president and CEO, John Lounds), to the country’s past, present and future, and to our diverse landscapes, using nature and storytelling.

“The C3 trip reinforced that we’re an ocean nation, and that gives us more of a responsibility to protect coastal areas,” says Green. “It showcased incredible stories from the people who live there, and how passionate they are about protecting their corner of Canada. It was really inspiring. This country has a huge opportunity to be leaders in conservation and conservation management.” It’s important to Green to foster a lifelong passion within youth to discover and learn more about Canada’s natural spaces. By bringing youth, and Canadians of all ages, to the Arctic and Antarctica — some of the world’s least-visited areas — Green is igniting a more coherent understanding of the importance of conservation.

“Bringing youth to the polar regions helps shape their perspectives and connections to nature. You can’t protect something you don’t understand.” Green hopes to continue encouraging new generations of conservationists by immersing them in landscapes that present-day conservationists are working hard to protect. “Whether you’re standing on a glacier, seeing a towering iceberg or looking into the eyes of a polar bear, those are the kinds of things that really touch people’s hearts. When you’re able to touch youth in that way, then you’ve really got them.”

*An autonomous area claimed by the Inuit in Newfoundland and Labrador.

This story originally appeared in the Winter 2018 issue of the Nature Conservancy of Canada Magazine. To learn more about how you can receive the magazine, click here.