A stark silhouette set against the prairie horizon, the whooping crane claims the title of the tallest bird in North America. This bird species has made a comeback since the 1940s when there were only 21–22 birds remaining. Today, there about 600 whooping cranes in the wild and in captivity. In 2017, a record number of 98 nests were recorded in Wood Buffalo National Park. Recovery efforts included captive breeding programs and a reintroduction to the wild, with a migratory Wisconsin-Florida population having been taught, using ultralight aircrafts, to migrate. These birds are long-lived; it is estimated that they can live up to 30 years or more in the wild. One captive bird used for breeding lived to be 39.

Whooping cranes are birds of large stature — their long neck, slender body and long legs put them at about 1.5 metres tall, and, in flight, their wingspan can measure more than 2.1 metres. Adult birds have red, black and grey feathers marking their head, which are in high contrast to the white on their body. Immature whooping cranes are whitish and mottled with brownish feathers. Their legs, wingtips and bills are black. 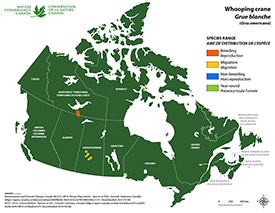 The only self-sustaining wild population of whooping cranes breeds in Canada’s Northwest Territories and Alberta’s Wood Buffalo National Park and winters primarily in the Aransas National Wildlife Refuge in Texas. During migration season they can be seen on various Nature Conservancy of Canada (NCC) properties, including Upper Qu’Appelle, West Parklands and West Boreal Transition Natural Areas in Saskatchewan. Since 1967, the Canadian Wildlife Service and the U.S. Fish and Wildlife Service began captive breeding and reintroduction programs, and as of 2017 there are four wild populations totalling 483 cranes, including three reintroduced populations in the eastern U.S. that are not yet self-sustaining.

During their summer breeding season, whooping cranes inhabit areas with poorly drained soil, with wetlands or shallow ponds separated by narrow ridges where trees such as white and black spruce and tamarack grow. Large nests are usually built in shallow water. The male and female build the nest by making a pile of vegetation and then compacting it.

In their Texan wintering ground, the birds can be found in tidal flats, shallow bays and estuarine marshes along the coast.

Whooping cranes are an omnivorous bird species, eating a variety of animals and plants. On their breeding grounds in Canada they primarily eat snails, crustaceans, aquatic insects, minnows, frogs and snakes. During migration, birds sometimes feed on waste grains from fields, such as barley, wheat and corn. Along the Gulf Coast, whooping cranes take advantage of the local specialties, primarily feeding on crabs and clams.

Whooping cranes are assessed as endangered by the Committee on the Status of Endangered Wildlife in Canada and are protected under the Species at Risk Act. They are listed as endangered by the International Union for Conservation of Nature Red List of Threatened Species. Historical evidence suggests that this crane was more widespread, but never common, in the past, with an estimated population of more than 10,000 individuals prior to European settlement. With the arrival of settlers in the 1800s, which brought about agriculture and hunting, whooping cranes started to disappear. In 1941, there were only 21–22 individuals left, but thanks to conservation efforts in the U.S. and Canada in the last few decades, the population rebounded to approximately 600 by 2011.

Current threats to the birds include power line collisions, hunting as a result of being mistaken for game birds and human disturbances to their nesting habitats. Their wintering ground in Aransas National Wildlife Refuge is also prone to severe weather events and contaminant spills, putting the birds’ safety at risk.